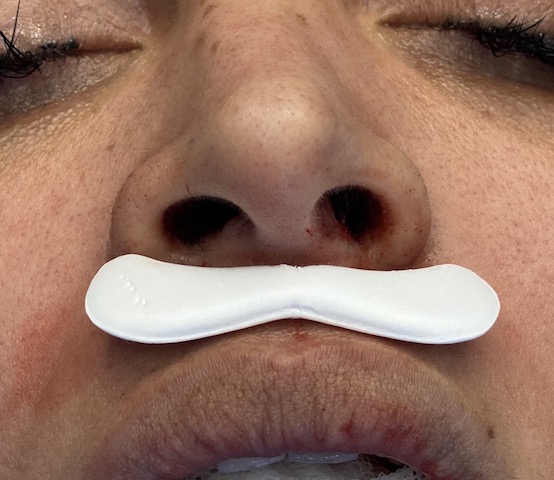 The bony pyriform rim adds support to the base of the nose particularly that of the nostrils. The central anterior nasal spine, on which the caudal end of the septum rests, supports the columella and tip of the nose. So when underdevelopment of the central midface occurs, which is common in certain ethnicities, the nose can look short/flat with wider nostrils. This serves as the anatomic basis and effectiveness for certain operations such as LeFort osteotomy advancements and pyriform rim augmentations.

Onlay augmentations of the pyriform rim has been done for decades with a variety of materials from bone/cartilage grafts to hand carved and preformed synthetic implants. Pyriform silicone implants have been around for a while but have never developed widespread use. More recent premaxillary/paranasal implants made of ePTFE offer improved designs with a material surface that creates tissue adherence. They have become my favorite central midface implant style currently that is available off the shelf.

Case Study: This female had a prior closed rhinoplasty several years previously which provided good improvement. But her residual concerns where her downturned tip that because unacceptably so when she smiled. She had a less than 90 degree nasolabial angle with a recess nasal base and deeper upper ends of here nasolabial folds. I recommended a premaxillary implant with a tip rhinoplasty. She also had a prior history of a LeFort I osteotomy. 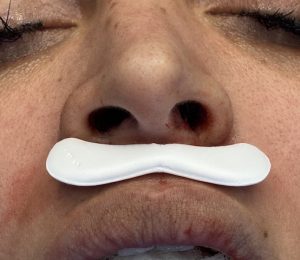 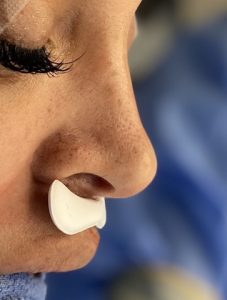 Under general anesthesia and through an intraoral high vestibular incision under the upper lip a subperiosteal pocket was created along the inferior pyriform rim and across the anterior nasal spine. A medium 5mm ePTFE premaxillary implant was selected for use. 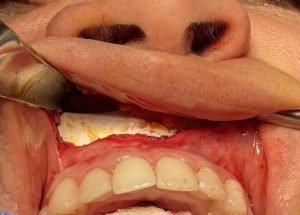 The implant was molded into the pocket. No screw fixation was used. A 3-O prolene suture was placed above it between the nostril bases to help control nostril flaring with smiling after surgery. Antibiotic powder was placed over the implant and a two layer muscle and mucosal closure done with resorbable sutures. 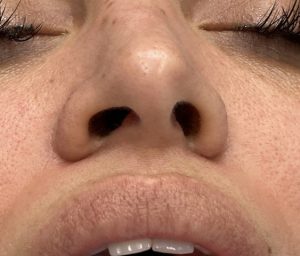 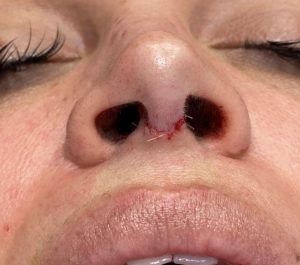 An open tip rhinoplasty was then done for infratip cartilage edge trimming to create the appearance of tip rotation as well as caudal septal realignment for columellar straightening. 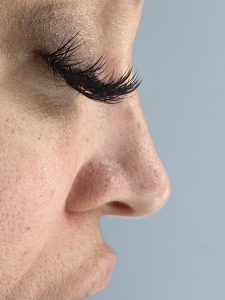 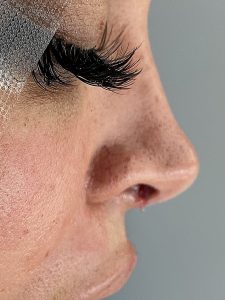 The premaxillary implant opens up the nasolabial angle, adds fullness around the nostril base and increases the appearance of some increased tip rotation. This effect can be enhanced by a tip rhinoplasty but it is important to be aware that the implant also has that effect so the combination must be done judiciously to avoid tipper rotation.

1) The premaxillary implant pushes out the base of the nose and opens up the nasolabial angle which provides central midface projection and may make the nose appear to have increased tip rotation.

2) The ePTFE premaxillary implant is placed intraorally and does not require bone fixation.

3) A tip rhinoplasty can be done with a premaxillary implant if further tip projection/rotation is needed.