The soft tissue chin pad is unique in that it is stretched over a near 90 degree bony projection. It is already on some degree of tension and has numerous osteocutaneous ligaments which adhere it to the bone. There is also the mentalis muscle which is the paired central muscle of the lower lip. Originating at a bony insertion higher up on the chin bone (incisive fossa of the alveolar process) it stretches over the end of the chin bone and inserts into the skin just under the chin.

The most common aesthetic manipulations of the chin (e.g., implant placement, bony reduction) requires cutting through the mentalis muscle (whether it is from above or below) and detachment of some if not all of the osteocutaneous ligamentous attachments. With an implant this allows the soft tissue pad to float on top of the implant with the implant recreating the tension on the overlying chin pad. But should the implant be removed this soft tissue tension is lost. With the loss of the osteocutaneus ligaments and the stretched out tissues the chin pad is prone to potential redundancies or sag. (ptosis) It does not always, and sometimes never, can just ‘snap back’ into its previous presurgical shape.

Case Study: This female had a history of intraoral chin implant placement that was subsequently removed. This left her with a soft tissue chin pad excess/fullness that became distorted with smiling. 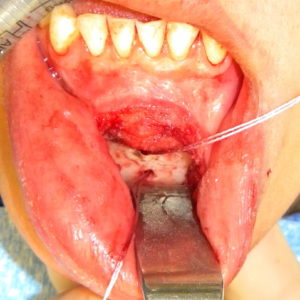 Initially she want to avoid any under the chin scarring so an intraoral mentalis muscle/soft tissue pad resuspension was done anchoring it to the bone. While this provided some modest benefit a chin pad redundancy remained. 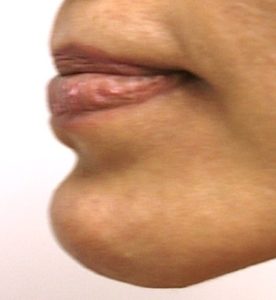 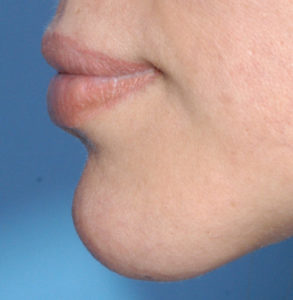 A secondary procedure of submental soft tissue chin pad excision with very small cannula liposuction on the sides of the pad was done. This produced further improvement, however, still less than optimally desired.

Excesses of the soft tissue chin pad are like excess tissues anywhere else in the body…removal of the excess is required. But because it is in a very visible facial area patients understandably want to avoid a scar particularly in a female. But in the end a submental excision is needed whose effect is largely based on how large the excision pattern is. This is limited under the chin to avoid visibility of the scar from the sides. My guideline is to never have the submental closure/scar go further to the side than a vertical line dropped down from the corners of the mouth. This does provide some limitations as the true width of the soft tissue chin pad, particularly in chin pad excesses, may exceed that width. This is where the use of microliposuction can be helpful. Although direct liposuction of the chin pad should always be avoided as this can result in unimprovable chin pad irregularities.

1) The soft tissue chin pad is prone to stretch and malformation, most commonly from chin implant placement and subsequent removal.

3) The amount of soft tissue chin pad reshaping depends on the extent or length of the submental incision.