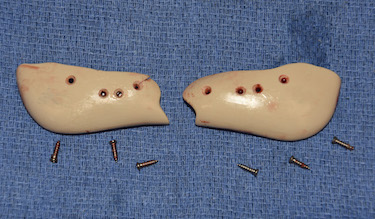 Background: Custom jaw implants can be made out of a variety of materials, each offering their own advantages and disadvantages. The newest member of potential custom implant materials is PEEK or polyether ether ketone. This is a semicrystalline thermoplastic material that was originally developed back in 1982 and had the appeal of being structurally stable at high temperatures including steam and hot water. Because of this resistance to high temperatures it has to be processed by machine milling, more specifically 3D printing. This has led to its use in craniofacial medical implants, starting initially as custom skull implants in neurosurgery.

The use of PEEK is now available for any type of custom facial implant whether it be reconstructive or for aesthetic augmentation. In aesthetic surgery the jaw angles are a logical application particularly when any form of vertical lengthening is required. Its rigidity is particularly suited to wrapping around the inferior border of the angle and when the amount of implant off the bone is more than what is on the bone. Provided that the length is restricted to the jaw angle region, isolated PEEK jaw angle implants can be an effective approach. However, the rigidity of the material prevents it from being used as a wrap around jawline implant. Its use is best for application to the lower jaw ‘corners’, the chin and jaw angles.

While some may claim that tissue adhesion occurs to PEEK, that has not been my experience. I have not seen it in skull or facial implants. Nor is that a necessarily favorable material characteristic. As removing a very rigid and tissue adhered implant combines the worst of material features in implant removal surgery.

Case Study: This patient had custom PEEK jaw angle implants placed previously but decided over time that she did not like the look of vertical jaw angle elongation. While the implants were well positioned bilaterally, the design may have been at fault as the implants pushed out the back of the jaw angles and had a non-smooth anterior end that did not blend smoothly into the bone. Regardless she desired removal not revision or a new design. 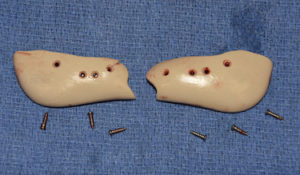 Under general anesthesia and through her existing intraoral incisions, the implant were exposed with non-adherent elevation of the capsule off of the implants. They were unscrewed and removed with minimal capsule disruption.

PEEk jaw angles implants exhibit what I have consistently seen from the skull down to the lower jaw. They have a smooth surface that does not really encourage tissue adherence…which in removal is a favorable feature. Their rigidity mandates that all screws be removed for the implant to be extracted. The material can be cut if one of the screw heads breaks off and can’t be directly unscrewed. But trying to leverage the implant off of the bone if a threaded screw remains should be avoided as the material’s rigidity may result in bone fracture rather than material fracture.

2) As a result of lack of tissue ingrowth PEEK jaw implants can be removed without large amounts of tissue trauma.

3) Because of their very rigid material qualities all fixation screws must be backed out completely and the implant removed as a single piece.