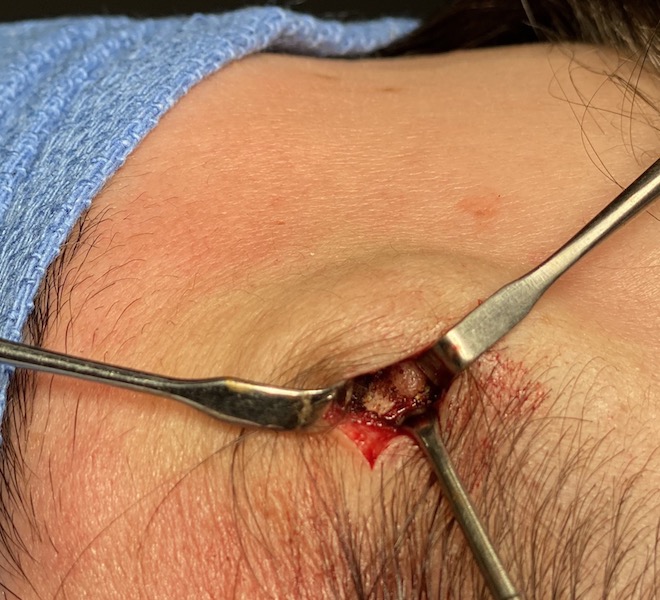 Background:  Osteomas are the most common benign bony masses of the forehead. Their fixed firm location with the scalp above to slide back and forth over it confirms the diagnosis and radiographic imaging assessment is not usually needed. Removal of forehead osteomas can be done by direct, hairline or retro hairline approaches. Once into the hairline endoscopic visualization may be needed.

But sometimes a little back into the hairline with a perpendicular incision to the osteoma allows for the incision to slide far enough forward that the endoscope can be avoided. 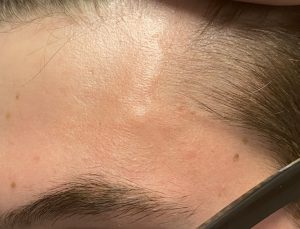 Case Study: This male presented with the development of a firm raised bony mass along the left temporal line of the forehead. Palpation revealed that there was also a linear bony extension that went inferiorly into the muscle. The pathway of the superficial temporal artery could be seen pass right around it. 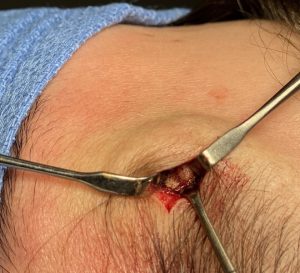 Under local anesthesia and through an incision placed back into the hairline just behind it the osteoma was exposed by a subperiosteal scalp flap elevation. By pulling the incision forward over the osteoma the temporal artery was retracted with it. Dissection was also done to expose the linear bony line that went from the osteoma into the temporal muscle. 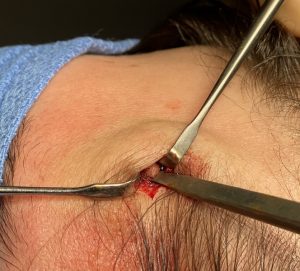 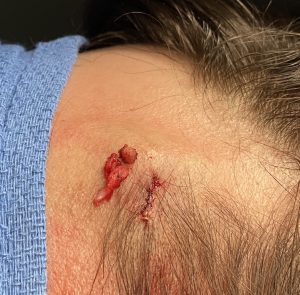 A 4mm osteotome was used to remove both the main osteoma (mound) and the linear extension into the muscle. The small hairline incision was closed with dissolvable sutures.

The most common location for forehead osteomas is on the flat broad surface of the forehead. They can be seen at any part of the large nearly square surface area that the confines of the superior frontal hairline, inferior eyebrows and the bilateral bony temporal lines create. The most common reason forehead osteomas occur is because this broad surface area provides ample opportunities for blunt trauma to occur…which are known causes of osteomas. Seeing an osteoma right at the lateral edge of the forehead at the temporal line is very uncommon and having a linear extension from the bony mound into the muscle is equally rare. But it supports that trauma in any forehead location and its subperiosteal bleed/bruising can be a nidus for bone formation.

1) An uncommon type of forehead osteoma is one that occurs at the bony temporal line and partially goes under the muscle.

2) Direct access to a temporal line osteoma can be done by an incision back in the hairline that parallels the hair shafts.

3) Pulling the incision anteriorly retracts the superficial temporal artery out of the way and avoids injury to it..