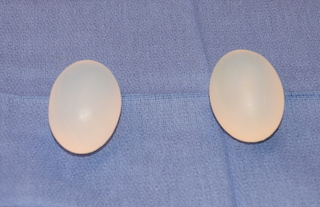 Background: While the penis and scrotum lie in anatomic proximity, there is no aesthetic standard as to the size relationship between the two. While not described such a proportionate relationship between the two most certainly does exist although it is open to individual patient interpretation. A penis may be too ‘large’ for the size of the scrotum or the converse may be perceived.

In the older male a penoscrotal disproportion can occur in the presence of erectile dysfunction in which a penile prosthesis has been placed. With concomitant testicular atrophy, the scrotum can be perceived to be out of proportion as the penis has become surgically enlarged. In such cases the placement of testicular prostheses can provide an immediate and permanent scrotal enlargement and create a better match to the penile size.

Case Study:  This middle-aged male presented for scrotal enlargement with testicular implants. He had a penile prosthesis in place that maintained a consistent penile length. His natural testicles measured 3.5 cms in length.

Under general anesthesia and through a 3 cm midline raphe incision pockets were developed inside dartos fascia on each side. A thick midline bridge of tissue was maintained between the two pockets. The existing testicles were pushed posterosuperiorly in the making of the pockets. Ultrasoft silicone testicular implants measuring 6.5cm in length and 4.75 cm in width are placed on each side. A three soft tissue closure was done.

When considering a increase in testicular size with two smaller than desired normal testicles, there are two options. One approach is to enlarge the existing testicles through a wrap around implant approach. (clam shell implant design) The other approach is place the larger sized implant next to the existing testicles in a side by side fashion and make them ‘invisible’ by comparison. Each testicular implant enlargement method has their advantages and disadvantages.

3) Even very large testicular implants can be placed through a small midline raphe incision.