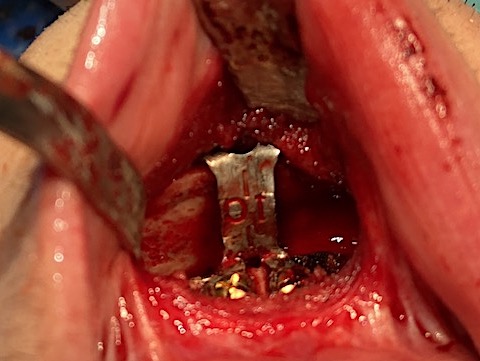 Background: Like any facial augmentation procedure there is always the need for a second procedure to adjust its dimensions in some manner for an improved aesthetic outcome. When it comes to augmentations done by implants this is usually a bit easier since an established pocket exists where implant retrieval can be done. But when it comes to bone-based facial augmentation procedures this is more challenging. The bone may have fully healed and the metal hardware originally used to hold it into place must be removed to access the bone. Then the bone must be recut and repositioned.

This is particularly illustrated when it comes to a sliding genioplasty. Secondary bone movements can always be done but the first step is to determine what type of metal fixation was used and whether it can be successfully removed. The former can be readily determined by a panorex xray. The latter can never be known for sure until surgery where factors such as bone overgrowth and stripping of screw heads can be appreciated until direct access is obtained. In most cases metal hardware can be removed and a secondary osteotomy done to reposition the bone. But one must be always prepared in case the hardware can not be removed.

Case Study: This male has a prior history of a 6mm forward movement sliding genioplasty. Given his original short chin this proved to be an inadequate amount of horizontal projection. His original surgeon went in to perform a secondary sliding genioplasty but stated the plate could not he removed and instead placed a chin implant. This did not look good to the patient and was subsequently removed. His panel x-ray showed an open grid plate with three screws above and two screws below. 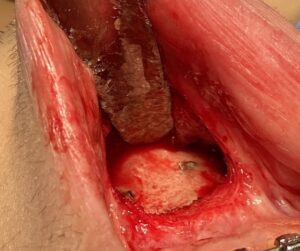 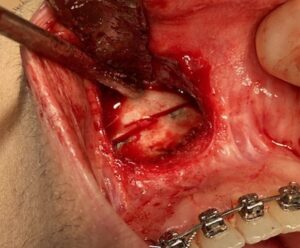 Under general anesthesia the chin bone was exposed through his original intraoral incision and the plate was indeed well overgrown with bone. (as would be expected from an open grid style plate. The inferior screws and plate holes were removed and a new osteotomy cut was done below the existing plate. 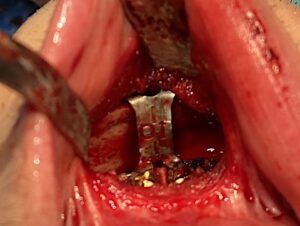 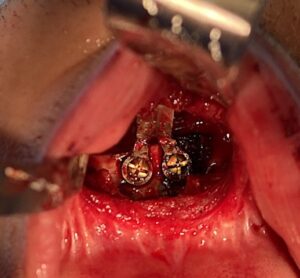 The chin segment was then advanced 10mms and a new plate and screws applied. The most technically challenging part of the plate application were the superior screws holes and avoiding the underlying plate in the bone. This took some bending of the upper plate arms to find a good bone spot for drilling and screw placement. 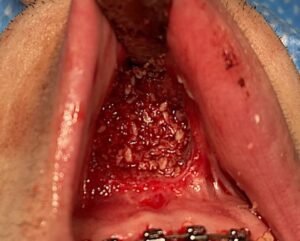 Tissue bank bone chips were then placed to fill in the bony step off above the advanced bone.

In essence he had an inadvertent two-level sliding genioplasty advancement (6mms first step, 10mms second step) Perhaps not the way he had initially placed it but he ended with a total 16mm advancement which got him to a much better aesthetic result. Not every case of inability to remove chin hardware can a lower osteotomy be done. But he had a high oblique cut and with a naturally vertically longer chin there was ample room to do a new lower bone cut. Choosing a chin implant was unnecessary…..easy but not necessary.

1) In a secondary genioplasty if the prior fixation devices can not be removed it may be possible to do a lower level osteotomy cut bypassing the need to do so.

2) With the new horizontal bone advancement the challenge is not putting the plate and screws on the mobilized segment but in the placement of the superior screws due to the underlying plate in the bone.

3) In secondary sliding genioplasty it is usually necessary to vertically shorten the chin as well in addition to bring it further forward.