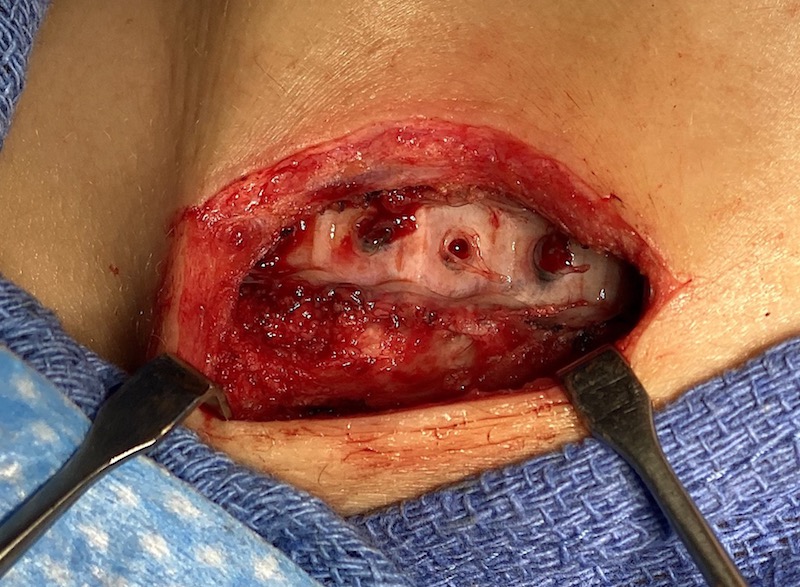 Background: Removal of a section of the horizontal length of the clavicle is an effective method for shoulder width reduction. (shoulder narrowing) After the segment of bone is removed a single superior plate or double plate fixation (superior and anterior plates) is applied for bone fixation to allow primary bone healing. These plates are strong enough that with limited voluntary range of arm motion restriction in the first month after surgery uncomplicated healing has occurred in the vast majority of the treated cases.

One common question is whether the clavicle plates need to be removed in the future. My current recommendation is that this is optional and the motivation to do so would only be because of plate palpability/visibility or just the desire to not have a foreign material in one’s body. The minimal wait time for plate fixation removal would be six (6) months after the initial surgery. To date no patient has requested hardware removal. That is until today.

One of the interesting obsess anions with clavicle hardware removal will be the state of the bone healing. I would expect solid bone healing and an invisible osteotomy line. But will there be bone thinning or bone thickening and overgrowth? When it comes to elective clavicle reduction osteotomies direct  observational assessment of the fate of the osteotomy is largely unknown. 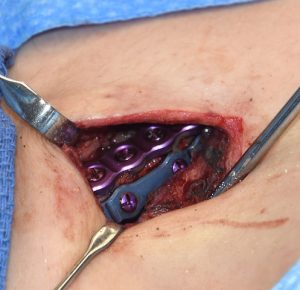 Case Study: This female had shoulder width reduction surgery over a year ago with double plate fixation, applied three weeks after the initial surgery when single plate hardware loosened on one side. She returned for some facial surgery and requested that the hardware be removed during the same surgery. Observation of the healed osteotomy sites is of interest, particularly on the side in which initial fixation stability was compromised. Preoperative x-rays showed healed clavicle osteotomy sites. 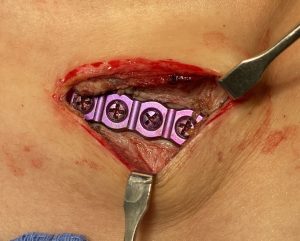 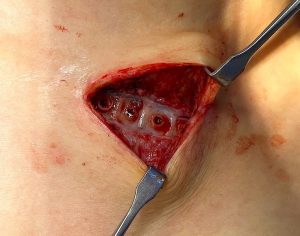 Under general anesthesia the initial right medial clavicle scar was opened and the superior plate exposed by opening up the enveloping capsule. All screws were intact and the plate and screws removed. An imprint of the plate on the bone was seen with bone ingrowth up into the threaded holes in the plate. No osteotomy line was visible 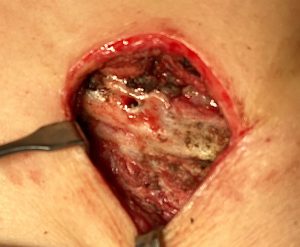 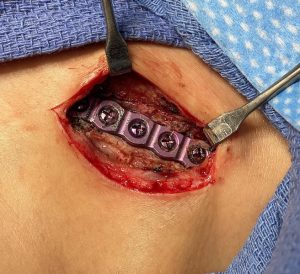 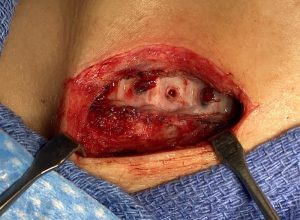 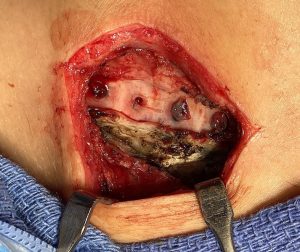 On the opposite side the exact same biologic response was seen with profound bone healing and 100% bony overgrowth over the anterior plate.

Unlike clavicle fractures the solid cross-sectional diameter of the two bone ends should reliably heal provided good bone stabilization is initially achieved and maintained during the first month after the surgery. This is confirmed in this case of secondary hardware removal. The profound complete bony overgrowth of the anterior plates was not anticipated but undoubtably occurs because of the elevated periosteum which is maintained above the osteotomy line by the plate over its length. Apparently the anterior surface of the clavicle is more osteogenic than the superior surface..

1) Secondary hardware removal from clavicle reduction osteotomies was seen to have a very robust bone healing one year after surgery.

2) In this removal case where double plate fixation was originally used, the superior plate was fully visible but the anterior plate was completely overgrown with bone.

3) Upon removal of the superior plate the bone was imprinted with a negative image of the plate with some bone overgrowth up into threaded screw holes of the plate.