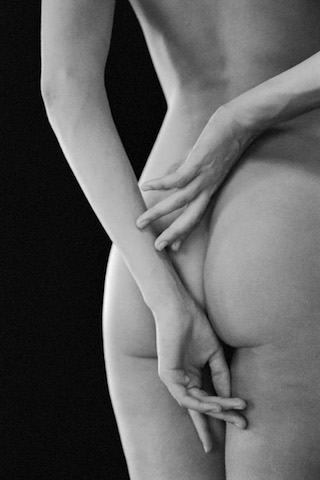 Background: While the most popular cosmetic buttock surgery performed today is augmentation, other reshaping procedures do exist. One such procedure is the lower buttock lift. While surgeons may try and treat a lower buttock ptosis or overhand by trying to fill it with fat, this is rarely effective. Other treat such overhangs with liposuction in an attempt to flatten it, but this rarely works either.

The definitive treatment for lower buttock sagging, overhang, or ptosis as it is sometimes called, is excisonal in nature. Whether it is due to loss of lower buttock volume and a resultant overhang or actual descent of the infragluteal fold, moving the low hanging tissues is the key. And in so doing the infragluteal fold is re-esablished at a higher level and in a more defined manner.

Determining the amount of lower buttock tissue excision that is necessary, like many procedures in plastic surgery, is a judgement. Emphasis is always placed on avoiding too much tissue removal and keeping the medial end of it away form the labia and the lateral end from going too far out into the hip area. It is far better to be conservative, which leaves room for more excision later, than over resection in which there is no good recovery position.

Case Study:  This athletic female had a lower buttock lift done one year previously for a vertically long buttocks with an inferior descent of the infragluteal folds. While she had good improvement she desired further vertical buttock shortening as seen in the original before and current new excisional markings.

Under general anesthesia and in the prone position, secondary lower buttock tissue excision was performed and a new higher infragluteal created. The tissue removed was approximately after that of the first time.

Creating an aesthetically pleasing infraguteal fold at the right level that has a pleasing curved shape with scars that stays ‘within bounds’ is all a matter of judgment of the amount and location of the tissue excision. While every patient wants an ideal result, an overcorrected or misshapen infragluteal fold can be a very difficult problem to correct. For this reason the amount of tissue excision should avoid an over aggressive approach… as secondary buttock lifts can always be successfully done with an even greater fine tuning of the result.

1) Buttock lifts are done to remove the overhang of the lower lower buttocks which may or may to be associated with a lowering of the infragluteal fold.

2) Buttocks lifts that have incompletely removed all of the desired lower overhang after healing or those who desire even more lift can have secondary buttock lifts.

3) A secondary buttock lift works just the same as the first although less usually needs to be removed.