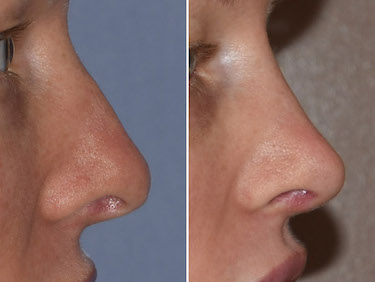 Background:  Feminization of the nose typically implies certain featural changes. Amongst them includes a a narrow nose in the front view and a lower dorsal line with upward tip rotation in the profile view. The degree of these changes is what influences the degree of nasal feminization and the patient’s perception of them.

The reduction of an osteocartilaginous nasal hump is of the most common nose reshaping requests. And while removing such a hump is common in many female rhinoplasties, the achievement of a straight dorsal line in profile may not be adequate for some patients. While a straight dorsal line is the standard goal for many rhinoplasties, for some females this may not be enough. Rather they prefer a more concave dorsal profile or a ‘swoop’ from the top of the nose down to the top where it re-emerges.

Case Study: This female had a history of a prior closed rhinoplasty which provide her improvement but left her wanting further changes. She felt the first rhinoplasty was too conservative. 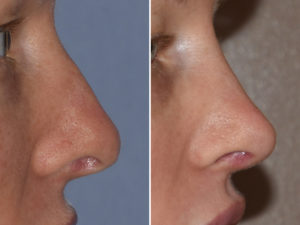 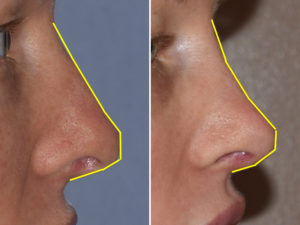 Under general anesthesia in a secondary rhinoplasty procedure an open approach was used. The superior nasal bones were rasped down and the cartilaginous dorsum reduced by sharp excision. The caudal septum was conservatively trimmed at an angle, the lower alar cartilages narrowed with double dome sutures and lateral crural spanning sutures and the supra tip cartilage caudal edges trimmed back. After closure alar rim cartilage grafts were inserted through a small rim skin incision. 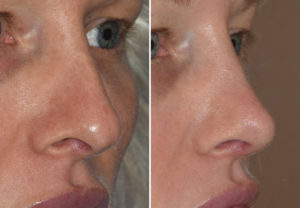 1) Secondary rhinoplasty to reshape to optimize the feminine shape of the nose revolves around lowering the dorsal line and increasing nasal tip rotation.

2) For the most assured result an open approach is usually best in secondary rhinoplasty.

3) Lowering the nasal dorsum and creating further tip rotation runs the risk of alar rim retraction which can be avoided by alar rim cartilage grafts.