Background: The frontal nerve of the forehead is better known as the supraorbital nerve. It is the terminal branch of first division of the trigeminal or fifth cranial. Like the rest of the trigeminal nerve, it is responsible for supplying sensation or feeling to its distribution. For the supraorbital nerve, this means feeling to the forehead skin back to about the middle of the scalp.

The course of the supraorbital nerve is largely vertical. As it exits from the supraorbital foramen at the brow bone, it extends upward into the scalp. Its vertical course exposes it to injury from traumatic lacerations which frequently occur in a transverse or oblique orientation. If deep enough the suprarorbital nerve may be cut if the laceration crosses anywhere above the eyebrow region.

While forehead lacerations are common and are almost always repaired in an emergency room setting, the potential issue of supraorbital nerve transection is rarely considered. Most non-plastic surgeons are not even aware of its course through the forehead and it is believed, because it is a sensory nerve, that its repair is irrelevant anyway. But injured or unrepaired sensory nerves do cause permanent numbness and, in rare cases, a painful neuroma.

Case Study: A 39 year-old female was involved in a motor vehicle accident of which, amongst other injuries, sustained a large oblique laceration across her left forehead. This laceration was repaired in the Emergency Room the day of her accident. In follow up care one month after her accident, her forehead scar was healing uneventfully and she had profound numbness from above the laceration the whole way to the back of her head. Over the next two months, her numbness did not improve and she began to develop pain in the forehead and in the front part of her scalp. On pressing over the laceration, this elicited a shooting pain up into the scalp. 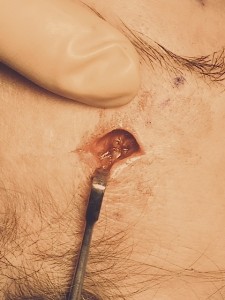 When seen at one week after surgery for suture removal, she stated that her shooting nerve pain was gone. Her upper forehead and scalp remained numb but it was only one week after surgery. It is hoped that she would eventually develop a return of normal feeling. Treating her nerve injury within months after the injury gives optimism that this will eventually occur