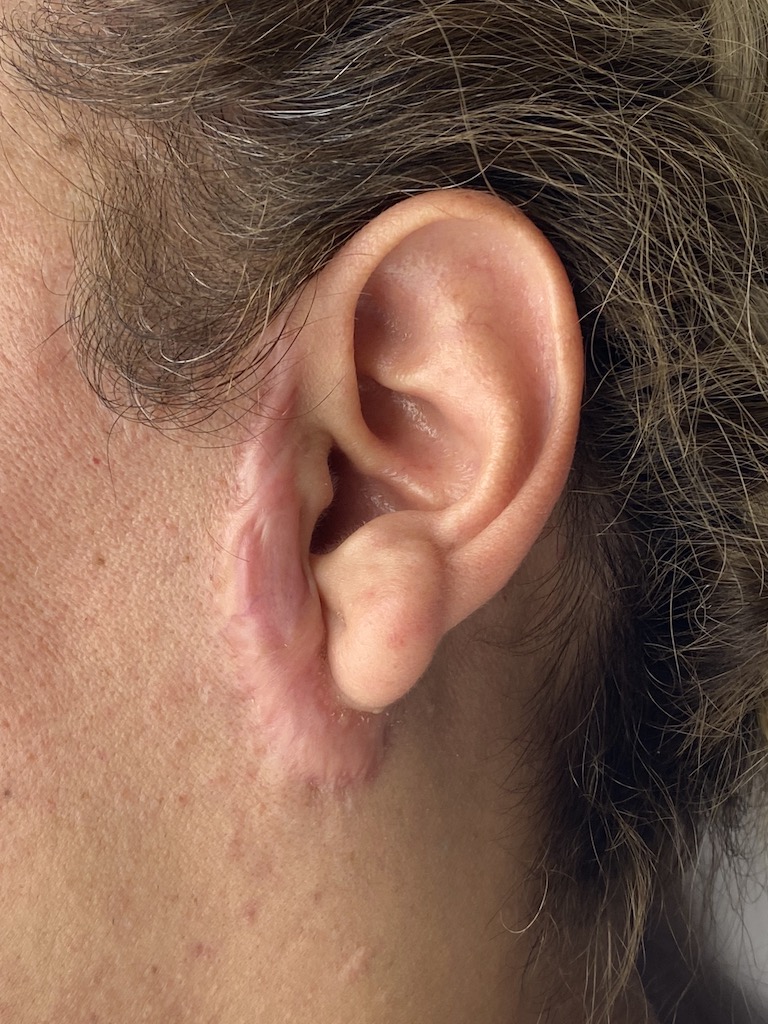 Background:  Facelift surgery has been performed for over a century. While there have been many advancements in facelift surgery due to a better understanding of the anatomy the one component of it that has never changed is the location of the incisions. They have always been placed around the ear and serve as the most identifiable remnant of the surgery… although hopefully they are virtually invisible and not identifiable at all.

When facelift incisions/scars become more visible than desired there are multiple reasons for it. Short term complications such as a hematoma and infection often separate the incision and secondary healing may be advised…which can lead to wide scars In some cases the placement of the incisions is not ideal and even with good healing they are too visible. The most common cause of adverse facelift scar healing, however, is tension…too much tension has been placed on the skin closure  (rather than on the deeper tissues) and the scar widens often distorting the earlobe as well.

In treating hypertrophic facelift scars it rarely is as simples just cut out them scar and close it. The skin has already been stretched out and is usually fairly taut from the prior facelift. Often the skin will not move. Some undermining helps but forcing the skin closed is a recipe for further scar widening. Usually the entire facelift procedure has to be repeated or at least extensive undermining done to get as tension-free skin closure as possible. 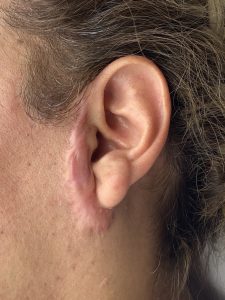 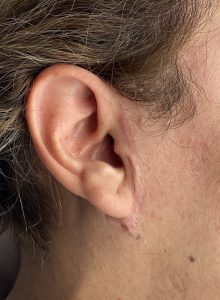 Case Study: This female had a prior history of a deep plane facelift by another surgeon that was complicated by an infection in the left side. As a result a wide and raised hypertrophic scar developed on the entire preauricular scar. The right side scar was much better but not ideal either. 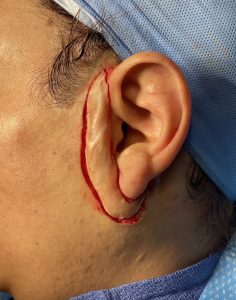 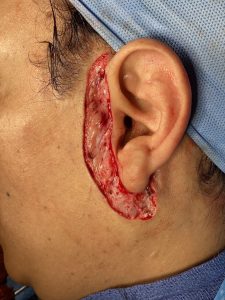 Under general anesthesia the left hypertrophic scar was completely excised, creating a wide skin defect. As was anticipated the skin was tight and immobile. 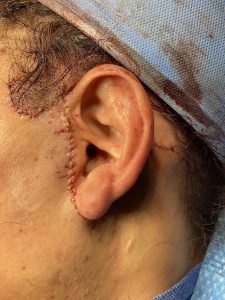 Long extended skin flaps were raised with SMAS undermining to get the tissue up over and onto the the ear where a tension free closure was done. The goal was to get the scar line back behind the tragus into a less visible location. But that would have out too much tension on the tragus, risking a tragal deformity and/or scar widening. While that would have been very possible on the right side I elected to have the scars match for now. With more time and aging the scar lines can eventually be moved back into a retrotragal position.

Whether the origin of the hypertrophic facelift scar is infection, hematoma or too much tension, rarely does a simple excision and closure produce a satisfactory improvement. It will likely require substantial skin flap elevations with some form of SMAS manipulation to get a necessary tension-free closure…which is the most assured intraoperative sign that a better scar result is assured.

1) Hypertrophic facelift scars can result from hematoma, infection and excessive skin tension on the closure around the ear.

2) Simple scar excision and closure may seem like it will work but in the skin flap that has already has a facelift it usually will not move.

3) Extended skin flaps with a SMAS flap (secondary facelift) is usually what is required to close the skin defect from a wide facelift scar excision.