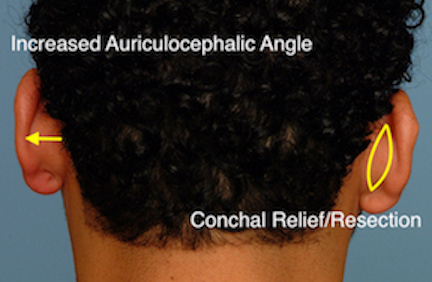 Background: The ear has a complex topography on close inspection but is typically overlooked as it sits on the side of the head. It only takes on increased aesthetic significance when it sticks out too far from the side of the head. An increased auriculocephalic angle can be created by alterations in the shape of the ear cartilage. The two most common cartilage shape alterations are either the lack of a developed antihelical fold near the helix or an enlarged concha next to the external auditory canal. In some patients the ear protrusion can be caused by a combination of both.

The most common form of a setback otoplasty for the protruding ear is based on treating the lack of an anti helical fold. Numerous suture techniques have been described to create a more discernible fold which pulls back the outer helical rim closer to the side of the head. While very effective in the properly selected patient, too much of an antihelical rim fold or failure to recognize a conceal hypertrophy component can end up with an over corrected or malformed ear.

In conchal-based ear protrusions the cartilage has been treated by several techniques. The most common technique is the concha-mastoid suture. This pulls back the conch bowl closer to the side of the head which then makes the ear less protrusive. This works well as long as the conceal cartilage is not too stiff. When the concha cartilage is very large or stiff it will need to be weakened to allow the outer ear to move more inward. Techniques for doing so consists of either some conchal cartilage resection or multi-directional cartilage scoring.

Case Study: This male had a mild ear protrusion that was completely conchal-based. His antihelical fold was well developed with good spacing between the fold and helical rim in front view. The extent of conchal contribution to his ear protrusion could be seen from behind. The planned treated area of the conceal is marked by an outlined vertical ellipse. 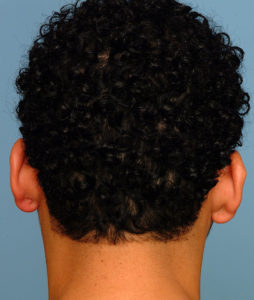 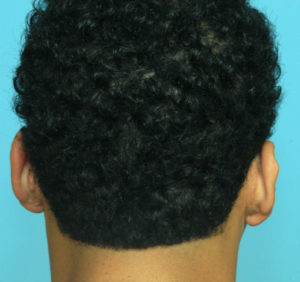 Under local anesthesia the concha was weakened by a small vertical ellipse and concha-mastoid sutures placed. This produced the moderate setback desired.

Resection of the concha can be done with the understanding that it will always produce a sharper edge on its more visible anterior surface. But as long as the resection is done more posteriorly the edge will fit just inside the antihelical fold-concha junction where it is not particularly visible. Otherwise cross-hatching of teh cartilage should be done if this edging is a potential concern.

1) One of the causes of protruding ears is an enlarged or exaggerated concha bowl.

2)  In conchal-based protruding ears, the excess concha can be excised or pulled back by concha-mastoid sutures.

3) A limited postauricular incision can be used for a conceal setback otoplasty.