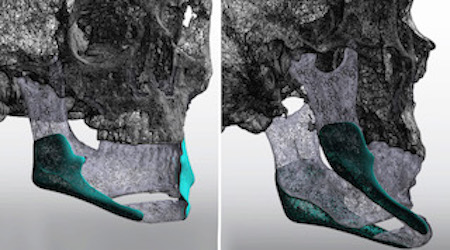 Background: Orthognathic surgery provides functional (occlusal) and certain aesthetic benefits in some patients. It primary role is almost always functional where it be for improved jaw function or in the treatment of sleep apnea. While cutting and moving the jaw bones has a long history of a high rate of successful bone healing, the rearrangement of the natural development of the bone can have the potential for unaesthetic shape changes around the osteotomy sites.

A common area of shape change in orthognathic surgery is with the sagittal split ramus osteotomy. (SSRO) Sectioning the jaw angle into two pieces (proximal and distal segments) and then putting it back together with the distal segment repositioned can potentially result in adverse bony shape changes. This could involve the shape of the jaw angles (high position) or in the mandibular plane angle or jawline’s linear shape.

Restoration of the jaw angle shape, or for aesthetic augmentation, after an SSRO is commonly done with a custom jaw angle implant design. This can be done in isolation or as part of an overall total jawline implant. A consideration of a custom jawline implant after orthognathic surgery is whether a previous sliding genioplasty has been done. This can affect whether the implant should be used for a further chin augmentation effect as the following case shows. 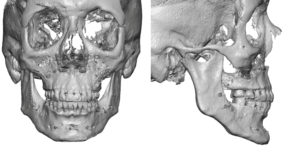 Case Study:  This middle-aged male presented for total jawline augmentation with a prior history of orthognathic surgery. Twenty years previously he had a LeFort I osteotomy, SSRO and sliding genioplasty. While this provided skim functional occlusal benefits he always wanted more of an aesthetic outcome for his lower jaw and chin. His 3D CT scan showed a lower jaw with high jaw angles, a steep mandibular plane angle, a bowed jawline shape and a well healed bony genioplasty. His goals now were more chin augmentation (horizontal as well as vertical), a lowering of the jaw angles and a straighter jawline between the angles and the chin. 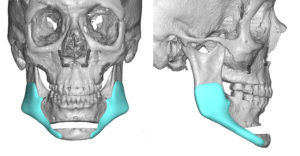 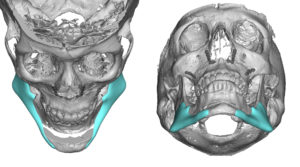 Because his needs for secondary chin augmentation were considerable, there were concerns about having an implant do that in the chin area after a prior sliding genioplasty. As a result the surgical plan became a combined sliding genioplasty (9mm horizontal and 7mms vertical) with custom jaw angle implants were designed.

Under general anesthesia and with a total intraoral approach, the sliding genioplasty was initially performed making a bone cut just below the original osteotomy line after removing indwelling surgical wires. Using a 12mm step plate and screws, the chin was moved forward 9mms and brought down 7mms. The jaw angle implants were placed using his prior posterior vestibular incisions. The implants were designed incorporating the raised screw heads and wires as  registration points on the backside of the implant. At the jaw angle area threee screws were placed in a percutaneous manner. The long anterior extensions of the implants were placed and screwed onto the chin in its new position as per the preoperative design.

The interpositional gap in the chin was grafted with allegeneic corticocancellous chips mixed with antibiotic powder. Enough graft was also placed to cover the plate and build up the step to help lessen the depth of the labiomental fold. 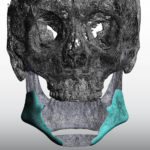 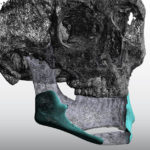 While the concept of combining a custom implant with an osteotomy for lower jaw augmentation may seem incongruous, it is not. I have commonly done so using standard jaw angle implants with sliding genioplasty when significant vertical chin lengthening is needed. A custom jaw angle/jawline implant offers the additional advantage of making a long anterior extension to join the repositioned chin to create a smooth jawline between back to front.

1) A prior sliding genioplasty may not be a good indication for a large implant volume to augment it later.

2) A sliding genioplasty can be combined with custom jaw angle implants for a total jawline augmentation effect.

3) The anterior ends or extensions of the custom jaw angle implants should be long enough to allow for adjustability and screw fixation to the chin segment.