But when breast ptosis exists implants alone will usually make their appearance worse even though they are bigger. The implant alone can not lift the mound adequately and it is actually driven inferiorly rather than superiorly. One of the most common breast reshaping combinations applicable when this situation exists is the lift-implants or mastopexy augmentation. This is an effective approach when the right combination of the degree of sagging is matched with the size of the implant.

But there is one scenario where the combination of lifting and implant placement can be contraindicated…when large breast implants are desired. Lifting a small ptosis breast mound on top of the pressure of large breast implants underneath it can be a recipe for complications. Separating the two procedures, or staging the lift-augmentation, is a safer and more effective approach.

Case Study: This middle-aged female presented for large breast implants. Her goal was to have as large as implants can could be safely placed. But with her small breasts and grade 1 nipple ptosis any size breast implant would have the breast mound and nipple positioned on the lower half of the enlarged breast.

A first stage full breast lift was performed keeping the existing size of the areolar. While these incisions went on to fully heal, one side developed a very typical opening around three weeks out which went on to fill by secondary intention. 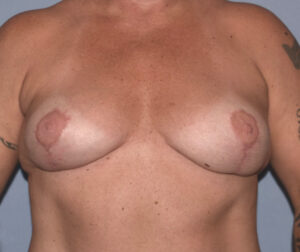 Three months after the breast lifts 700cc high profile silicone breast implants were placed in a dual plane position through the inframammary incisions.

Whenever breast ptosis exists, even in the small breast, there is no assurance that the size of the implant can adequately lift the nipple to a more centric mound position. In large breast implants in particular the breast mound and nipple may be driven more inferiorly rather than superiorly when almost any degree of breast ptosis exists. While every patient would like to solve both the breast mound position and breast size in a single combined procedure (lift and implants) the risks are dramatically increased by trying to do so. It is more prudent to perform a staged approach by first getting the nipple and mound into a more lifted position initially which will respond more favorably to larger breast implant placements later.

2) A first stage full breast lift repositions the nipple to a centric position which sets the stage for breast implants later with no risk of wound healing problems.

3) With a centralized nipple position and healed breast lift scars the stress of a large breast implants one the overlying tissues is safely tolerated.