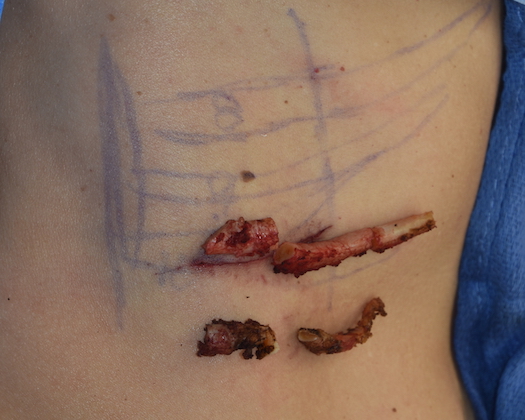 Background: The 12 pairs of ribs that comprise the ribcage provide protection for various internal organs. Such ribs are divided into three types, sternal ribs, costal ribs and floating ribs. These descriptive terms refer to how these bony distal extensions from the spine connect. Ribs #1 through #7 wrap around the chest and connect to the sternum. Ribs #8 through #10 wrap around and connect to the costal cartilages which make up the subcostal ribcage. Ribs #11 and #12 are the floating ribs as they point downwards and have no connections.

Rib pain-related symptoms can occur from any of the ribs for a variety of reasons. The lower ribs are more commonly associated with impingement syndromes such as the costo-iliac impingement syndrome.(also called rib tip syndrome) Due to a reduced costoiliac distance the floating #12 and #11 ribs can touch the iliac crest when bending over causing back and loin pain.

At a higher level the anterior subcostal cartilaginous ribs can also cause impingement on the abdominal cavity. If they are too vertically long or have an excessive downward bow to them bending over may cause excessive compression on the underlying abdominal contents. Like costo-iliac syndrome removal of the portions of the prominent rib margins can be curative.

Case Study: This middle-aged female had a prior history of right costo-ioiac syndrome for which she was successfully treated by removal of the outer portions of ribs #10, 11 and 12. While her lower back pain was relieved, she still had some residual pain under the right subcostal ribs centered over its lowest margin formed by the remaining cartilaginous segments of rib #10 and the intact cartilaginous rib #9.

Under general anesthesia a 5cm skin incision was made along the lateral subcostal rib margin. Making a vertical split in the rectus music of the abdominal wall, the remaining cartilaginous segment of rib #10 was removed. (the bony portion was removed in her prior surgery) The distal end of rib #9 was separated from its attachment close to the sternum and released back along its margin posteriorly until the boy junction was encountered. Two cms of the bony part of rib #9 was also removed.

The cartilaginous portions of ribs #9 and 10 created a 3.5 cm elevation of the subcostal rib margin, increasing the vertical length of the abdominal wall and removing the abdominal impingement.

1) The subcostal rib margin can be a source of abdominal impingement when bending over.

2) The cartilaginous portions of ribs #9 and 10 can raise the subcostal rib margin and relieve symptoms of impingement.

3) An anterior incision is needed for subcostal rib removal.