Background: A facelift is one of the most well known but also misunderstood of the anti-aging facial surgical procedures. Besides the frequent misinterpretation of what a facelift really is, there is also the confusion added to it by the marketing of many ‘franchise’ forms of facelifts which promise big changes with limited recovery. Numerous other minimally invasive to non-surgical types of lifts created by fillers and energy-based devices add to the mix of ‘facelift’ options.

But moving beyond what constitutes a facelift are other important concepts such as the results and its short and long-term effects. Patients often ask how long a facelift lasts with  an understanding that it is not a permanent result. Like the onward march of time, aging will continue and the results of most facelifts will eventually be lost. (perhaps not completely but some of its effects will surely dissipate)

The most noticeable change will be in the neck and it should be divided into a short-term and a long-term change. The long-term change is obvious and refers to when one may return to what they looked like before the surgery. Estimates vary and no one number can factor in all the patient variables but the time frame of 8 to 12 years is often quoted. But a potential short-term change is often overlooked…a phenomenon known as rebound relaxation.

Case Study: This 65 year-old female wanted to improve her sagging neck and jowls. While the upper portion of her face had similar aging changes, these were not of concern to her. She stated that she did not look this way until about ten years ago when it started. 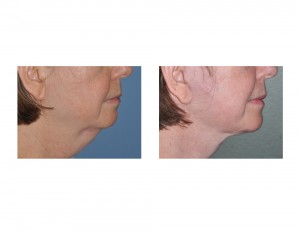 Under general anesthesia, a full lower facelift was performed including neck defatting, platysmal plication and SMAS imbrication. Enough skin was mobilized back up over the ears that the entire ear had to be cut out from the mobilized skin redraping during closure. 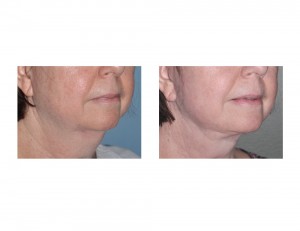 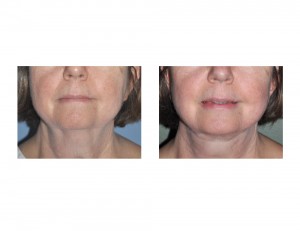 After a full recovery, she had a great result with a fairly sharp cervicomental angle and no evident loose neck skin. When seen at six months after the procedure, she still had a very significant change but there had developed a small amount of loose skin or banding in the submental region under the chin. This was not an aesthetic concern to her not did she want anything done about it. She felt she had aged an ‘additional six months’ since the surgery.

Almost no matter how ‘tight’a facelift may be done, the ability of the result to hold is partially dependent on the elasticity of the skin. To no surprise, older aged skin has lost a lot of elasticity and will exhibit some relapse or skin relaxation afterward. This is usually seen in the submental region which is most distant from the point of pull of a facelift.(ears) These submental changes are not aging but a secondary skin relaxation phenomenon which is not usually seen until three to six months after surgery. Sometimes it does not become evident until about one year after the procedure. A submentoplasty procedure can be done to ‘touch up’ the facelift result and attacks this problem through direct skin excision.

1) A lower facelift works by a combination of removal and repositioning with the skin part being the most visible.

2) The vast majority of facelift patients want a natural looking result that is not oevrpulled or has a ‘windswept’ look.

3) Every facelift, no matter how much tissue removed, will undergo some degree of submental relaxation in the first six months after surgery. This should not be construed as recurrent aging or failure of the facelift. A secondary submentoplasty may be needed for optimal neck correction.