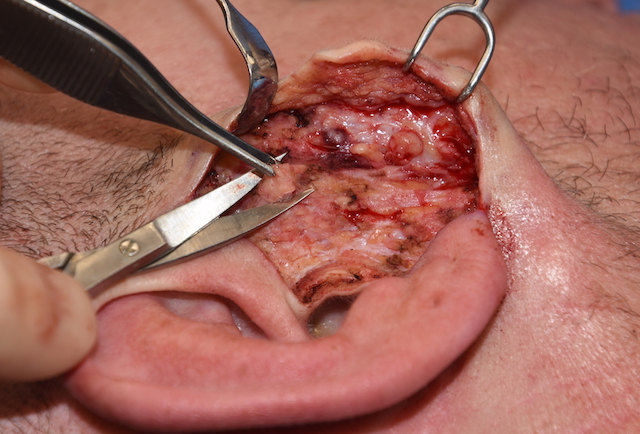 Background: Injectable fillers have revolutionized aesthetic volume treatment options in the face. By being able to be placed beneath the skin by a needle or cannula they can be virtually injected almost anywhere. The limits to their placement is only adequate elasticity and thickness of the soft tissues to receive them.

While over twenty brand names of injectable fillers now exist, the vast majority of them are hyaluronic acid-based. These are highly biocompatible synthetic materials with a very low risk of adverse reactions to them. They also have the ‘advantage’ that their effects are not permanent….which is a benefit if their aesthetic effect is not desired or overdone.

But the appeal of a permanent injectable filler is understandable of which only one is currently FDA-approved. (silicone oil does not count as its use remains off label) Bellafill is a composite injectable filler that is comprised of very small PMMA microspheres with a bovine collagen carrier. While the collagen carrier is absorbed the plastic beads remain behind creating a permanent augmentation effect, both by their presence but also by the ingrowth of fibrous tissue in and around them.

While a permanent augmentation effect from fillers seems like that would always be a good outcome, it is not in the event of material irregularities and contour deformities. Removal of a permanent filler is a lot more challenging than its placement.

Case Study: This male had Bellafill injection treatments for the treatment of undereye hollows and to smooth out wrinkled skin in front of the ears. Due to palpable material irregularities he now desired the material to be removed.

Under general anesthesia a retrotragal incision was made in front of the ears. A skin flap was raised and lumps of firm tissue in the SMAS was excised taking care to not cut into the parotid gland capsule. Using electrocautery for portions of raising the skin flap as well as the excision a distinct odor of ‘acrylic’ was easily detected. After the excision redundant skin was removed.

In the lower eye area a subciliary incision was made and a skin flap raised down to the palpable linear lump areas. Given the proximity of some of the excisions to the overlying skin it was decided to not do total removal to avoid creating an eyelid contour deformity. Similar to the preauricular excisions the use of electrocautery created a distinct odor of ‘acrylic’. After the excisions the lower lid was resuspended using SOOF and orbiculares muscle sutures.

As this case illustrates permanent fillers like Bellafill can only be removed in limited amounts due to access, the ingrowth of scar tissue and the need to avoid creating a new soft tissue contour deformity.

1) Removal of permanent injectable fillers in the face can only be done by open excision.

2) There are are limited areas of the face that can be accessed for excisional removal.

3) The integration of the filler into the tissues often leads to incomplete excision of them to prevent contour deformities or nerve injury.