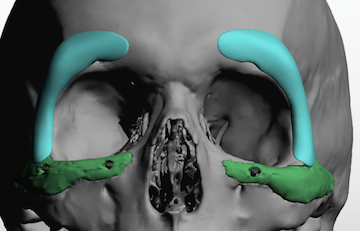 Near circumferential orbital augmentation, which is virtually unheard of, is now possible because of 3D custom implant designing. In such designs the historically separate orbital rim segments can be combined into a composite implant that is designed and made in two pieces for placement. The key to such an implant placement is that they must be able to be placed through limited eyelid incisions.

Patients that may seek such near circumferential orbital augmentation are those that have bony deficiencies which are usually manifest by excessive globe exposure. In some parents this is obvious based on the relationship of the cornea of the globe which mat be close or actually protrude being a line drain between the upper and lower as well as the medial and lateral anterior bony points. In other patients the interpretation of excess globe exposure is an aesthetic based on how much one wants more deep set eyes. 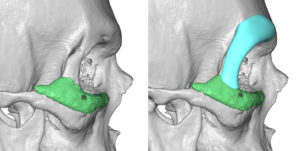 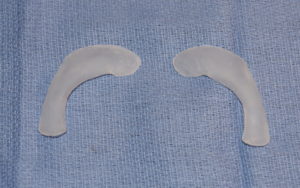 A postop 3D CT scan showed good alignment of the new supra lateral rim implants up against the infraorbital rim implants which was in agreement with the preoperative design position.

2) A two-piece implant consisting of infraorbital and supra lateral orbital rim implants is used, done either together or separately.

3) The custom supralateral orbital rim implant is the most challenging to place through a lower eyelid incision because of its curved surface and lack of direct line of vision.