Background: Sagging of the neck due to aging is inevitable in everyone, it is only a matter of when and to what degree the tissue droop will occur. In older patients with more advanced neck changes the neck sag becomes more pronounced and heavy, usually creating a distinct midline of skin and fat down the center of the neck from the chin to below the Adam’s apple. This is more typical men and women whose ages are north of 75 years of age.

The definitive treatment of the sagging neck is a lower facelift. It is called ‘definitive’ not only because it is well accepted by patients and surgeons alike but because it places the scars to perform it in an aesthetically pleasing location. (around the ears and under the chin) While effective the large midline neck droop requires a major surgical effort to get it pulled up and back from the effects of a lower facelift.

Some older patients may not prefer to undergo a major lower facelift to improve their neck sag. This may be due to health concerns, cost or recovery.  The antithesis to a lower facelift is the direct necklift which can be performed in less time, requires less anesthesia and has a much less involved recovery. It works by removing the sag directly, basically right down the middle of the neck. Its effectiveness is without question a powerful creator of a more defined cervicomental angle. It also provides the most effective midline platysma muscle plication due to its complete exposure does the whole length of they neck.

The midline scar, of course, is its only major concern of the direct necklift and a major aesthetic one. Patient selection and education is critical and such scars must be fully understood before surgery. This is often less of an issue in older men due to their beard skin but more so in older women.

Case Study:  This 80 year-old female was bothered by her large neck sag and heavy jowls. She preferred a more ‘simple’ solution to her neck issues than a full lower facelift. 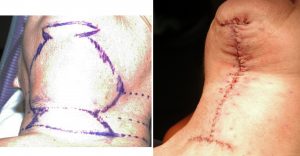 Under IV sedation a candelabra pattern direct necklift pattern was marked and the skin and fat excised. In large direct neck lifts the large exciseon will create skin bunching at the superior and inferior ends (dogears) that will require excision. Thus the horizontal excisions build this into the overall cutout design. The platysma muscle is then plicated down the middle and the flaps brought together and closed in a modified I-bar pattern.

Her early results show a complete elimination of the neck sag and a defined cervicomental angle. She went on to heal to her satisfaction and no neck scar revision was required.

Older women undergo direct necklifts with less frequency than men. This may be partially due to understandable scar concerns and/or awareness of the procedure. But other than the midline scar and how well it heals, there are no gender differences in how the procedure is performed or in its recovery.

1) The central midline sag of the neck in older patients is amenable to a direct necklift procedure…if the scar is acceptable.

2) The direct necklift is the most powerful method of cervicomental improvement of all the surgical procedures.

3) The jowls in a direct necklift are smoothed out by being down rather than back as in a traditional lower facelift.