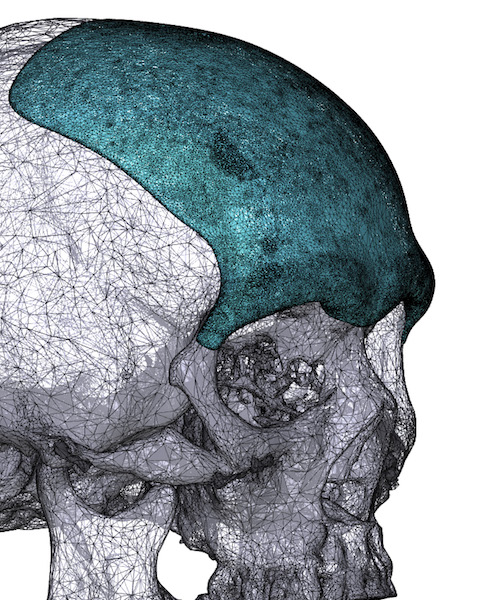 On casual glance the shape of the brow bone seems fairly simple. But its topography is more complex than just a linear raised bar across the top of the eyes. Its shape is more complex and shows mound-like projections medially from the expanded frontal sinus beneath it. These central mounds are in the shape of ‘eagle wings’ when inspected carefully. These sinus mounds taper down at the level of the infraorbital nerve notch and then become a more consistent curved bar of bone out to the junction of the temporal line and lateral orbital rim.

In designing a combined custom forehead and brow bone implant, these shape considerations must be taken into account. Unlike all other custom facial implants, the forehead covers a much larger surface area. While the forehead may seem like a relatively simple design it is not. Besides the degree of backward slope other considerations include when should it begin to fade into the skull superiorly, what are its thickness from side to side, should it cross over the temporal lines laterally onto the fascia and how accentuated should the temporal lines be.

Factoring the forehead and brow bone shapes in the custom implant design requires a lot of considerations in which much of the detailed aesthetics have little guidelines to follow. 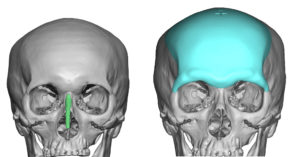 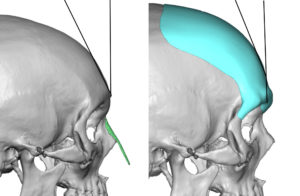 A custom forehead-brow bone implant was designed that extended being his high frontal hairline, decreased the forehead inclination by 10 degrees, added 3mms of brow bone projection and lowered the edge of the brow bone by 3mms.

In addition a more distinct eagle wing shape to the brow bones was created. Total implant volume was 73mls. (meaning it would take 73 injectable filler syringes or 73ccs of fat to create a similar volumetric addition.

Under general anesthesia a 7cm scalp incision was made 2 mms behind the frontal hairline. Under endoscopic visualization, subperiosteal dissection was done down to and over the brow bones and out onto the lateral orbital rims to the frontozygomatic suture line. Once a good pocket was obtained the implant was folded and inserted through the incision. Once inside the implant was unfolded and positioned as per the design.

The key in any brow bone implant is to ensure that the wings of the implant (the part that extends around the lateral orbital rim and usually to the frontozygmatic suture line is as low as is designed. This may often require an upper eyelid incision to do so given the thin wings and the need to negotiate them into a narrow subperiosteal tunnel. In this patient successful inferior positioning was achieved without the need for the eyelid incisions. The endoscope can help to provide a visual check which is aided by external palpation. 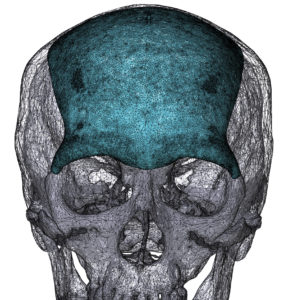 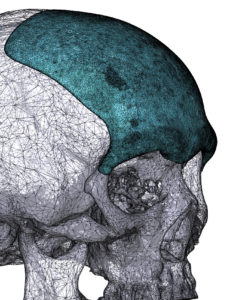 The custom forehead-brow bone implant is a powerful changer of the upper third of the face. However the specifics of how to design it is not simple given the large surface area of bony coverage and the natural complex topography of its shape around a curved surface. Similarly placement of the implant must usually be done through limited incisions in the male in particular. Getting the implant positioned low enough is paramount and is not always easy given the naturally tight tissues overlying the brow bones.

1) Lack of brow bone prominences and a retroclined forehead are optimally improved by a custom forehead-brow bone implant.

2) The design of the brow bone part of the implant must incorporate the ‘eagle wing’ shape to create the most natural external contour.

3) Endoscopic dissection may allow for the placement of the custom forehead-brow bone implant without upper eyelid incisions in some, but not all, patients.