Background: Shoulder reshaping is a relatively new area of aesthetic surgery in which the shoulders can become smaller or wider. By changing the length of the clavicle bone the outer shape of the shoulders can be changed. Started initially with shoulder narrowing surgery, which is most commonly done in transgender male to female patients, it is now gaining traction in younger males for shoulder widening. While the differences between the two types of aesthetic shoulder surgery seem to merely be lengthening or shortening the clavicle, there are some more significant differences as well.

One of the major functions of the clavicle, the only horizontally oriented bone in the body, is to keep the shoulders away from the sternum. As a result in shoulder narrowing when the clavicle is cut and the length of bone removed, the shoulder naturally falls inward. Once it has lot length there is little resistance to move in the desired direction of change. (less) However in widening the shoulders once the clavicle is cut the shoulder does not unfortunately fall to the side and get longer or wider. Rather it largely just sits there with no natural lengthening effect. To get a length increase the cut clavicle bone must be forced apart and considerable effort must be used to get a length change that comes far easier in clavicle reduction surgery.

What is the anatomic difference between clavicle lengthening vs reduction…or to put it another way why is lengthening the clavicle bone so much harder than shortening it? The fundamental reason is that the surrounding shoulder anatomy at the outer aspect of the clavicle is made to support that length. To make the clavicle longer the entire shoulder girdle must be pushed outward which is not easy given the extensive soft tissue attachments to the scapula and humerus bones. The anatomic limits to date have been in the 18 to 20mm immediate increase of bone length.

Case Study: This male desired to have broader shoulders with a lean body habitus. His bideltoid distance was 47cms. Pushing against the solid cortical bone ends on each side of the split as hard as possible and then clamping the inner halfs of the split, 20mm of bone length was achieved on one side and 18mms on the other side. A single lag screw was used to hold the two ends of the bone apart. 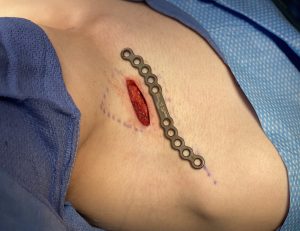 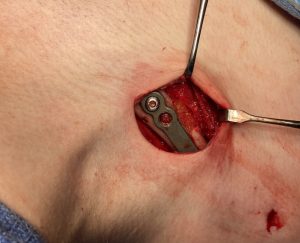 A long spanning 10 hole clavicle fracture plate was then used, with three screws on each side, on the superior surface of the bone for rigid fixation. While the inner three screws and one of the outer screws could be placed through the incision, the last two outer screws required a separate small incision and the use of a drill guide. Lastly allogeneic bone putty was used to fill in the half thickness bone gaps in each side of the expanded sagittal split. 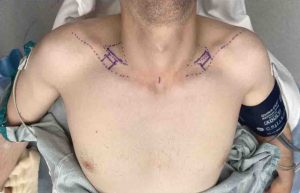 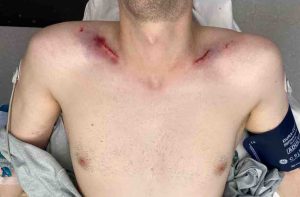 Because the clavicle is not a straight bone and it lengthens along the hypotenuse of a right triangle shape, the shoulder is pulled back a bit as the bone is lengthened. This is the opposite effect of what occurs in clavicle reduction surgery in which the shoulder rolls in a bit as the bone length is decreased. This is a helpful shoulder shape change in the spirit of what the patient is trying to achieve.

While I would desire every patient to get at least 25mms of bone lengthening the soft tissue restraints of pushing against the entire shoulder girdle creates limitations. Currently that appears to be in the 20mm range. Whether that would vary amongst different patients is not yet known until larger numbers of these surgeries are done. Perhaps some patients will allow greater lengths to be achieved with more supple shoulder girdle tissues. Currently I advise patients to do preoperative shoulder stretches in the hope that it may increase how much the shoulder can be widened. Whether this is truly effective is not known but at least it is harmless to do so.

1) The sagittal split osteotomy offers a sound bone lengthening procedure of the clavicle that provides the fastest and the ability to create the most length.

2) The limiting factor in clavicle lengthening is the restriction posed by the shoulder girdle and its attached scapular attachments. At present there is no way to overcome this restriction.

3) I have yet to see a clavicle lengthening patient that can get beyond 20mms of bone separation between the sagittal split half-cortical bone ends.