Background: The frontal sinuses are responsible for the shape of the brow bones. Men have larger frontal sinus cavities and hence more prominent brow bones. While some may think that the brow bones are solid bone they are actually just an expanded air cavity with a covering of bone that is only several millimeters thick. The expanded air cavity is usually less than 10ml in size. But in men with an overgrown frontal sinus it sticks out like a bubble in the lower forehead and creates a hyper masculine or Neanderthal appearance.

Of the two techniques available for male brow bone reduction, overwhelmingly the bone flap removal and setback technique is the more effective. This can always create a setback of 7 to 10mms as opposed to a burring technique which can only accomplish less than 50% of that amount if not less.

In the so called osteoplastic flap technique (bone removal and setback), there are several key steps in performing the procedure at the brow bone level. The most important preoperative decision, however, is not about the bone but about the incisional access. Since good exposure is needed to perform the procedure, the placement of a semi-coronal or near-coronal scalp incision is needed. This is a major consideration in the male and, while there are some exceptions for incision placement in some men (hairline incision, mid-forehead and direct eyebrow approach), the need for the coronal incision exists is many men.

Case Study: This young male was bothered by his prominent brow bones. His forehead was not abnormally sloped backward. So it was determined that only brow bone reduction would be needed. (no forehead augmentation needed)

Under general anesthesia an initial near complete coronal scalp incision was made 3 cms behind his full hairline. The forehead flap was reflected downward in the subperiosteal plane centrally and along the deep temporalis fascia laterally. The prominent expanded front sinus bone could be seen. Subperoisteal dissection was on their inferior surfaces down to the frontonasal junction and exposed and preserved the supraorbital nerves. The markings for the bone flap outlines a single one-piece bone flap removal.

A reciprocating saw was used to make circumferential bone cuts at the level of the surrounding frontal bone. The bone flap was fully released and lifted off with small osteotomies as a single frontal sinus bone cover.

On the back table the removed bone flap was burned down on both its inner and outer sides to reduce its convex shape and make it as fat as possible without making holes in the bone.

The bone flap was tried in, removing some of its edges as well as the edges of the surrounding frontal bone to get a snug fit with as little bone gaps as possible. It is also important to reduce the central bony septum is any amount of bone flap setback is to be achieved. Once a good fit was obtained a central 1.5mm plate and screws were applied. The bone flap was set into place. To prevent any rocking of the bone flap a smaller 3 hole plate was applied to one sidebar rigid flap fixation.

Prior to closure a double layer of a resorbable collagen mesh was applied over the bone flap to help create a temporary frontal sinus seal. The forehead/scalp flat was then closed over a drain. 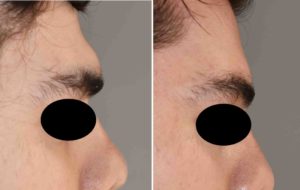 The immediate effectiveness of the bone flap setback technique for male brow bone reduction could be appreciated right at the end of the surgery. The topography of the brow bone persists (middle valley with modest brow bone protrusions) but it has much lean projection. (9mms less)

1) The enlarged male brow bone is due to an over pneumatized frontal sinus.

2) The bone flap removal and setback technique is needed in men that need more than a 2 to 3mm brow bone reduction.