Background: Proportions are one measurable assessment of facial attractiveness and are an important preoperative assessment in aesthetic facial reshaping surgery. One proportionate assessment is that of the facial thirds, specifically that of the horizontal thirds. Measured by upper third (hairline to glabella), middle third (glabella to subnasale) and lower third (subnasale to menton), these should ideally be equal in the measured vertical lengths between them. Another facial length proportionate assessment is that of the Golden Ratio relationship between  the lateral canthus to stomion of 1.6 to 1.0 between stomion to menton or the hairline to lateral ala of 1.6 to lateral ala to menton of 1.0.

Patients with a vertical lower facial deficiency will easily be detected by a facial third assessment. But they have clinical findings that make the diagnosis without having to do such specific measurements. The chin will simply look inadequate in height between the lower lip and the bottom of the chin. The labiomental fold may be deep if an existing overbite exists which is not uncommon in the vertically short lower jaw. The jawline can be indistinct without a well defined inferior border and they may have a flat or near flat mandibular plane angle.

Short of orthognathic surgery the only two ways to vertically lengthen the lower jaw is the chin wing osteotomy and a custom jawline implant. The most complete method to lengthen the whole jawline from the jaw angle to the chin is the custom jawline implant. While the chin wing osteotomy has the advantage of being an autologous procedure, it leaves the jaw angle area largely unlengthened by where the horizontal osteotomy line ends. It also has the disadvantage of not being able to provide any width in the jaw angle area.

Case Study: This male presented with a vertical lower facial deficiency that he long recognized. He had the habit of posturing his lower jaw partially open to create what he felt was a better facial look. When having him open his lower jaw to what he felt looked good the interincisal dstance was 5mms between his upper and lower incisor teeth. 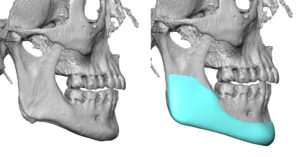 In designing a custom jawline implant for him the overall vertical lengthening was 5mms from the inferior border. This was kept consistent alone the entire jawline keeping the same mandibular plane angle relationship sine his was not flat initially. While he did not need any substantial width along the jawline, flanges of the material were needed to go up along the jawline for positioning and stability purposes. 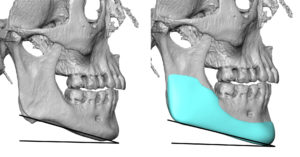 By dropping it down the clinical 5mms of lower facial lengthening desired, the lower skeletal third came into proportion with the middle skeletal third.

Under general anesthesia and through an external submental and intraoral paired vestibular incisions the custom jawline implant was inserted in a front to back technique. Double screw fixation was used at each ‘corner’.

Lengthening the entire jawline, particularly in the chin area, requires that the overlying soft tissues will follow it. While that seems obvious that they would this is only assured in the two thirds of the jawline that lie outside of the chin. The very adherent soft tissue chin pad is the rate limiting step in jawline soft tissue expansion and its ability to do so is limited particularly in the vertical direction. In my experience vertical lengthening over 7mms can be precarious as the soft tissue chin pad may not completely stretch over it at closure. (creating a double bump effect) This is an important consideration in any custom jawline implant design that significantly elongates the chin area.

1) Vertical deficiencies of the lower face are usually caused by a lower jaw that has inadequate height from angle to chin.

2) Opening the bite to demonstrate the external desired vertical lengthening of the lower jaw establishes an interocclusal measurement for a custom jawline implant design.

3) The custom jawline implant design must have flanges that go up along the sides of the lower jaw for support and positioning.