Background:  Occupying a third of the face the forehead is well known to have a gender specific shape and features. For this reason forehead procedures is one of the most common focuses of facial feminization surgery. In male to female forehead feminization the brow bone reduction procedure is most commonly associated with it and, while having an important aesthetic effect, is not the only part of the forehead that can be reshaped.

The brow bones occupy just the lower third of the forehead. From a bone standpoint there is also the temporal lines which set the width and prominence of the sides of the forehead. Temporal line reduction removes the sharper edges and softens the transition into the temporal muscle region. There is also the central and upper bony forehead which impacts its slope in profile as well as whether it has a flatter or rounder shape. Augmentation of the more central forehead above the brow bones, in conjunction with temporal line reduction, can give the forehead a rounder shape with some increased verticality.

While the bony manipulations catch a lot of the attention of forehead feminization, the soft tissues that frame the bone should not be overlooked, The perception of the vertical length of the forehead is controlled by the position and shape of the frontal hairline. Frontal hairline advancement can shorten the longer forehead as well as improve its vertical slope in profile as the hairline moves further down on the convex transition between the bony forehead and the top of the skull. It also provides a convenient point of access for all of the bony forehead and brow bone procedures. In addition to the bony procedures, soft tissue brow lifting/reshaping can be performed concurrently with the hairline advancement.

Case Study: This patient desired a more feminine facial appearance of which the upper third of the face was a major focus. Computer imaging was used to demonstrate a variety of changes to determine what would be the most effective procedures for her. 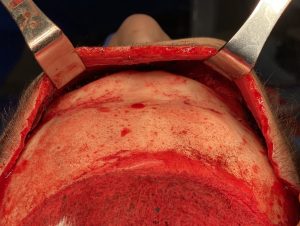 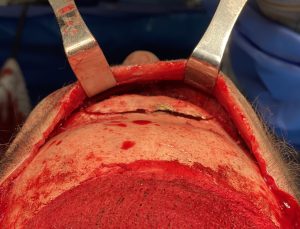 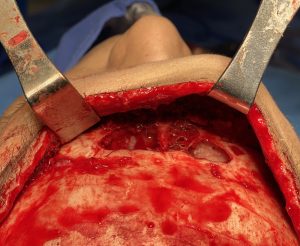 Under general anesthesia a frontal hairline incision was made through which the prominent medial brow bone prominences were exposed. A reciprocating saw was used to cut the base of the prominences so single large bone flap could be removed. This exposed the underlying frontal sinuses in which all bone edges were reduced to ensure an optimal flat surface. This also include the midline septum that separates the two sides of the frontal sinuses. 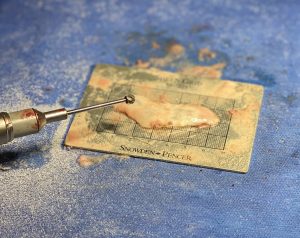 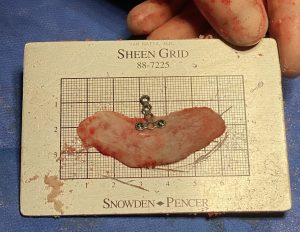 On the back table the convex curved shape of the brow bone flap was burred down to as flat as possible. A single 1.5mm plate was applied to the bone flap. 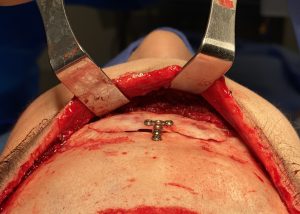 The reshaped bone flap was put back over the frontal sinus with a flatter and more recessed position and secured by the small plate. 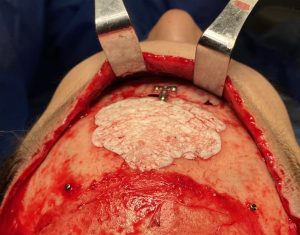 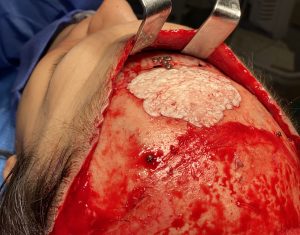 After the brow bone work was done  he bony temporal lines were burred down and a small central PMMA bone cement forehead augmentation was done to complete the bony reshaping. 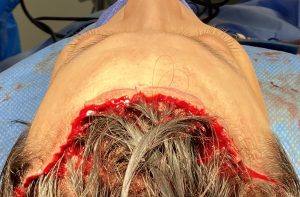 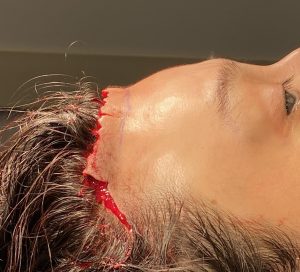 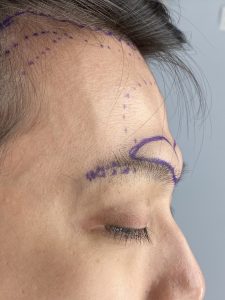 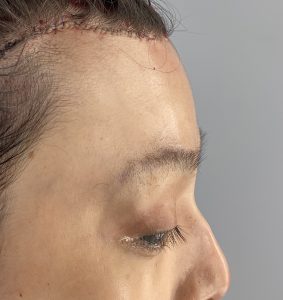 Her intraoperative before and after profile shows the significant forehead reshaping change.

There are a number of bony and soft tissue forehead feminization procedures that can be of aesthetic benefit. Bony procedures include brow bone and temporal line reductions as well as central forehead augmentation. Soft tissue reshaping of the forehead include vertical reduction by hairline advancement as well as brow lifting. While not every patient may require all of these procedures, when indicated, the best approach is the hairline incision which can permit all of them to be done during the same surgery.

1) Forehead feminization consists of a variety of bone and soft tissue procedures that reframe the upper third of the face in a gender specific manner.

3) Soft tissue forehead reshaping options are a frontal hairline advancement to vertically shorten the forehead and brow lifting to change the arc/shape of the eyebrows over the underlying reduced brow bones.