Background: The forehead is a seemingly blank canvas with a wide expanse of skin devoid of any central features. But the shape of the forehead is actually much more complex than it looks and has more anatomic features than how it appears on a cursory glance. It is boarded superiorly by the frontal hairline, to the sides by the temples, inferiorly by the eyebrows and has an influence on the proportion of the upper third of the face compared to the rest of the face by what lies between these borders.

The vertical length of the forehead is determined by the distance between the frontal hairline and the eyebrows. Surgical hairline advancements are a well known procedure to bring the frontal edge of it lower. Browlifts are equally well known to raise the level of the eyebrows. While usually done separately in patient ages that are different (younger vs older), they can also be done together which in my experience is not rare. Getting the two hair-bearing structures into their desired positions can be challenging when done together given that there is no stable central point of registration between the two moving superior and inferior structures.

The temples are not typically thought of as influencing the shape of the forehead. But sitting laterally to it, its shape (degree of concavity) is affected by the vertical length of the forehead. In long narrow foreheads the temples are frequently more hollow in appearance. (increased concavity) The increased length of the forehead combined with narrow temples gives an elongated appearance and an upper third of the face that is out of proportion to the lower two thirds. Shortening the hair to eyebrow length and widening the temples bit brings the forehead into better balance with the rest of the face.

Case Study:  This young female had a long forehead that measured 7.5 cms between the hairline and the frontonasal junction in the midline and 7 cms between the hairline and the mid-eyebrow arch. She also had eyebrow asymmetry with a lower eyebrow on the right side. She had decreased bitemporal width. In profile her frontal hairline was located behind the turn of the forehead onto the top of the skull.

Under general anesthesia she had a hairline advancement of 14mms centrally which tapered less to the sides. Concurrent a pretrichial browlift was done with higher elevation of the eyebrow on the right side. Through the hairline incision, extended temporal implants were placed in a subfascial location on top of the temporalis muscle. 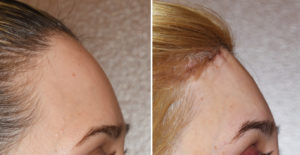 When seen three days after surgery she had a lower frontal hairline, improved brow symmetry and increased temporal width. Her most significant postoperative sequelae was the bruising under her eyes which will take up to three weeks to resolve. The quality of the frontal hairline scar will take 3 to 4 months to fully appreciate.

1) There are multiple types of forehead reshaping procedures including adjustment of the bordering hair components, shape of the adjoining temples and prominence of the frontal bone.

2) The combination of a hairline advancement and a browlift requires the greatest amount of vertical forehead reduction.

3) The pretrichial incision for a hairline advancement provides convenient access for placement of subfascial temporal implants.