Background:  Temporal augmentation can be done for either a reconstructive or an aesthetic purpose. Most reconstructive temporal augmentations are either due to a craniotomy defect or loss of normal muscle fill of the concave bony temporal fossa from surgery or trauma. Such augmentations take a more craniofacial approach and use various forms of bone cements and usually involve a large access through an extended scalp incision to place them deep into the temporal fossa below the muscle.

Conversely aesthetic temporal augmentations are most commonly done by injection either using synthetic fillers or fat placing them either into the muscle or above the fascia into the subcutaneous temporal tissues. Less commonly done, although permanent and often more effective, is a surgical approach using temporal implants. These are unique facial implants in that they are designed to augment muscle and not bone. As a result they are placed on top of the muscle under the deep fascial layer covering the muscle. To do so requires very small incisions in the temporal hair bearing areas.

While temporal implants could potentially be placed down at the bone level to push out the muscle, the use of bone cement on top of the muscle does not seem equally versatile due to its very firm material feel.

Case Study: This male, who was undergoing right vertical orbital dystopia (VOD) surgery, had a prior temporal augmentation using bone cement, in which the right side had numerous issues. Besides an irregular contour and inadequate projection to the other side, he had intermittent clicking of the implant. When the implant was pushed on it could be seen that the entire right temporal area/implant moved. 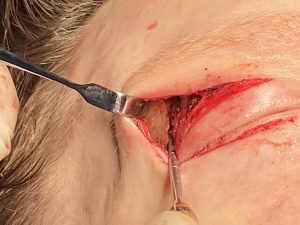 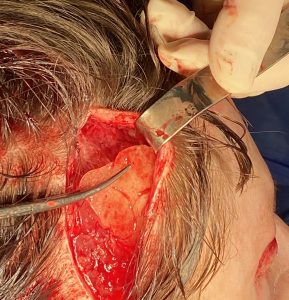 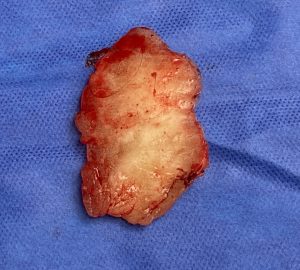 During the transpalpebral brow bone reduction as part of his VOD surgery, a rim of bone cement was seen up against the lateral brow bone. This was an unexpected location for bone cement which was thought to be down under the muscle. When grabbing this rim of bone cement the entire temporal region moved. It then became apparent, as incredulous as it seemed, that the bone cement temporal augmentation was on top of the muscle right under the skin. Opening his existing right coronal incision allowed the hard piece of cement to be removed in one piece. 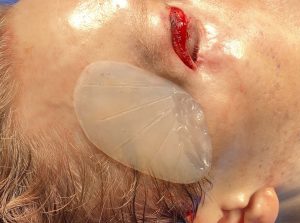 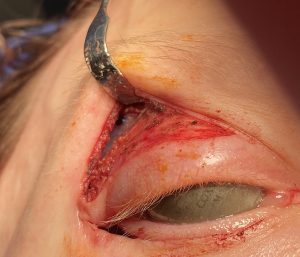 The temporal implant replacement was a large extended silicone temporal implant that was modified to fit the vertical length of the pocket from the bony temporal line down to the zygomatic arch. The implant was secured interposition by a single screw into the lateral brow bone through the transpalpebral incision.

1) Temporal augmentation can be done by either a craniofacial or aesthetic approach which is done at different tissue levels.

2) Bone cements for temporal augmentation is typically done down at the bone level beneath the muscle.

3) Temporal implants are ultra soft silicone implants designed to be placed on top of the muscle beneath the fascia.