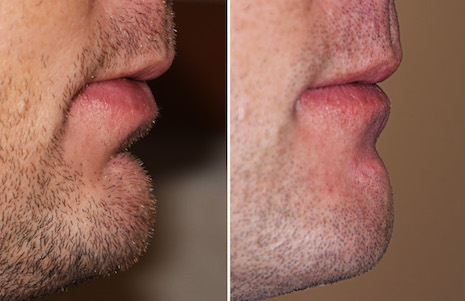 Background: The labiomental fold is a normal topographic feature of almost all chins. It is the crease or fold that occurs below the lower lip about one-third of the way down along the vertical length of the chin. While its presence is synonymous with the bony origin of the mentalis muscle, ts depth and visibility is influenced  by a variety of other anatomic factors. These include the position of the lower front teeth, the volume of the lower lip, the size of the soft tissue chin pad and the bony projection of the chin.

The deep labiomental fold is most commonly treated by injectable fillers and usually successfully so. While effective, their lack of permanence in the tight tissues most labiomentak folds has led some to have injectable fat grafting done or even the use of subcutaneous implants placed through small skin incisions. All of these volumetric methods have their advantages and disadvantages.

The most assured method of reducing the depth of the labiomental fold is an intraoral release and the placement of an interpositional dermal-fat graft. By adding the fat graft between the labiomental fold skin and the mentalis muscle the fold is assured to be pushed out. In my experience of doing this fold procedure many times the take of the fat graft is very high and no complications have occurred. The following is the lone aesthetic complication that I have ever seen from this procedure. 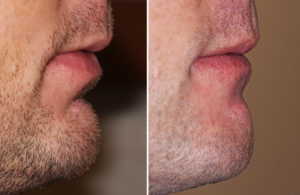 Under local anesthesia the dermal component of the graft was removed by dissecting it off of the overlying skin.

The theory of the dermal-fat graft is that by keeping the dermis attached to the fat it can be revascularized faster and improved fat retention will result. Thus it is important to put the dermal part of the graft right up against the dermis of the overlying skin to facilitate capillary ingrowth. What this case has shown me for the first time is that t may be better to keep the dermal side down against the muscle…where revascularization can probably occur just as fast and the risk of ‘dermal show’ is eliminated.

1) The deep labiomental fold can be treated effectively with the intraoral placement of a dermal-fat graft.

2) The persistence of small composite fat grafts is very high when placed in the chin.

3) This case is the first I have seen where the dermal component of the composite graft created an external outline seen through the skin. It was resolved by removing  the dermal portion of the fat graft.