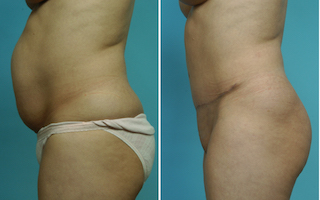 Background:  The success of tummy tuck surgery is based on its removal of excess tissue and tightening of the abdominal wall. There is no comparative other surgery or non-surgical procedure that can create a remotely similar effect. Nothing is as effective as the wide excision of undesired abdominal tissues. It may be a radical approach but it can also produce dramatic results.

Tummy tucks are often thought of as an operation for people that are overweight or unable to lose weight. But the reality is just the opposite. Most people who undergo tummy tucks are often at a good or reasonable weight. It is not a weight issue, it is an issue of excessive and loose abdominal tissues.

Thus it is not uncommon to see thin females who have excessive and redundant abdominal tissues. This is because their pregnancies have expanded the abdominal area centrally. This results in a literal mound of protruding tissue with the umbilical stalk at it’s central core. Those women who develop a large pregnancy or who have two or more fetuses develop this protrusion in the only place the expansion can go…forward with little stretching to the sides.

Case Study:  This young thin female presented with a large protruding mass of abdominal tissue centered around the umbilicus after having had a twin pregnancy six months earlier. The umbilicus was stretched outward with stretch marks radiating out from it. A large rectus  diastasis could be felt. Her flanks/sides of her waistline, however, remain normal with no expanded or loose tissues.

Under general anesthesia a full tummy tuck was performed with a horizontal tissue excision between the hip points. To work out the dog ears during closure the scar line extended out further. Midline rectus fascia plication was done to close down the diastasis. A shortened umbilical stalk was brought through a new overlying skin hole. 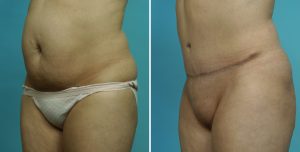 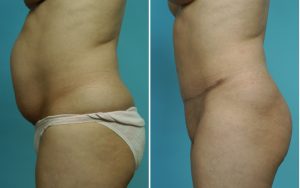 Her results show the dramatic change in body shape that can occur when the central abdominal expansion is decompressed and tightened back down. There is a resultant scar line to do so but that is a worthy tradeoff for the abdominal shape improvement.

1) A tummy tuck can be performed in thin or heavier patients. The operation is about excessive and loose tissues and not necessarily about weight.

3) A full tummy tuck, although it create a comparatively long scar, can effectively flatten a periumbilical mound in an otherwise thin female.