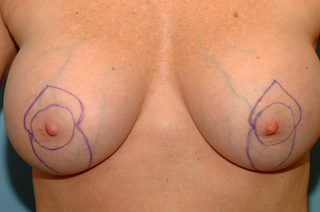 Background:  The breasts are ideally perceived as having a nipple-areolar complex (hereafter referred to as the nipple) that is centrally positioned on the breast mound skin. Life (pregnancies, weight loss and gravity) can change what was once an ideal position of the nipple but breast enhancing surgeries can restore it.

In some cases of breast augmentation the position of the nipple preoperatively raises concerns about whether it will be improved with the placement of an implant. It may be decided that rather than do any lift type procedure it is best to wait and see what happens as there is a chance that a slightly low nipple position may be aesthetically acceptable. But when it turns out that the nipple is too low, what is the patient’s options at that point on an already inflated breast mound?

Case Study:  This middle aged female had a prior breast augmentation several years previously but was never happy with how they looked. While the breast size was acceptable, the lower nipple position was not. While a crescent nipple lift was considered, it was felt that procedure would not do enough and would also stretch out the size of the areola vertically.

Under general anesthesia a limited vertical breast lift was marked out. The existing areolar size was maintained  and the skin between the markings and the areola removed. Skin flaps were raised and the nipple lifted and vertically closed beneath it.

Her before and after pictures shows a postoperative centralized nipple position. The scars were acceptable but consistent with wha happen in thin skin that is under tension from the underlying implant augmentation.

The choice between a lower than desired nipple position or sone vertical breast scars is a personal one. It is a classic choice between two undesiredbles and which one a patient can live with the best.

1) The fundamental concepts of breast lifts are to lift the nipple and reshape or tighten the breast mound.

2) To lift low positioned nipples after a breast implant augmentation that requires greater than 1 cm, a vertical breast lift is required.

3) The aesthetic price of the scars must be weighed against the value of a centrally positioned nipple on the breast mound.