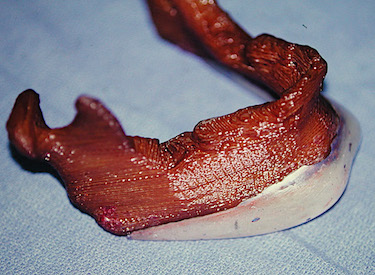 Background:  Over a twenty-five year period I have designed and implanted nearly 1,000 custom skull and facial implants for both reconstructive and aesthetic patients. To no surprise much has been learned about the custom implant design process, surgical implantation and their aesthetic effects as well as management of implant-related complications/revisions over that time period. Not to mention how the computer designing and implant fabrication technologies have progressed and improved.

One of the very relevant questions some patients ask, and all patients should at least think about, is what are the long term implications of these implants. Because most custom skull and facial implants are generally bigger than performed standard implants is their fate similar or different than what we know, for example, from a much smaller standard chin implant. Since there are so few surgeons who have extensive experience in this area and patients come from all world to be treated, there are no controlled multicenter clinical outcome studies nor much even individual patient long term followup.

As a result the only information we can draw upon, for now, is the rare individual patient who appears for further surgery may years later for either an issue with the original implant or for another unrelated surgery. From that perspective I present the following patient. 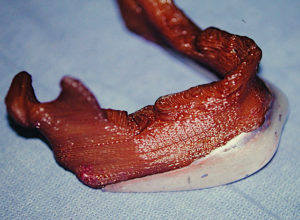 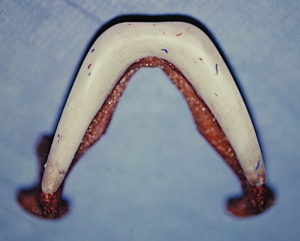 Case Study: Nearly twenty years ago a middle-aged male presented with the specific request for vertical lengthening of his jawline from his chin back to his jaw angles. He had a vertically short lower third of his face that was most pronounced at his chin. He otherwise had adequate horizontal chin projection. He also wanted a  more square chin appearance. Using a mandibular model printed in resin from his 3D CT scan, a custom wrap around lower jaw implant was designed with guidance of the patient to his requested design specifications. The implant model was fabricated and machined out of acrylic. From the acrylic model it was then sent to the manufacturer to be made into a medium durometer solid silicone implant. 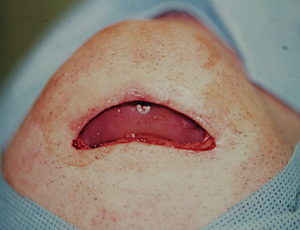 Under general anesthesia and through a single curved submental skin incision, the  implant was inserted in a subperiosteal pocket created all the way back to the jaw angles. It was then secured with a single 2.0mm screw through the implant to the inferior border of the chin. 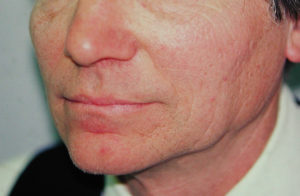 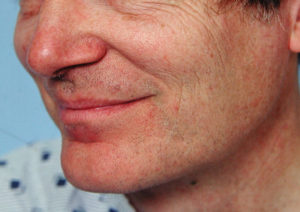 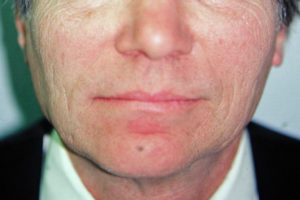 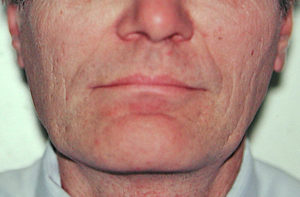 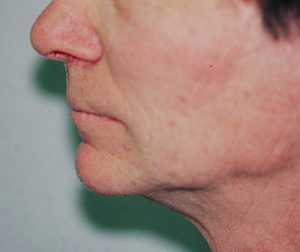 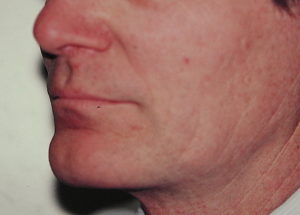 His postoperative course was uncomplicated and he had an excellent result his implant surgery. 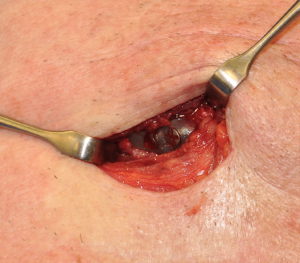 He was not seen again until seventeen years later when he was bothered by some mobility of the thin tail of the left side of the implant at the jaw angle area. This was treated by a direct incisional approach to secure the tail of the implant to the bone with two screws. From this point forward he has not had any further implant-related issues. And to the best of my knowledge he continues life with a complication-free implant.

Looking back on this case today several decades later technically I can make the following comments:

What does this case show about the long-term implant behavior:

1) The long-term followup (23 years) from a patient that had the first custom jawline implant placed for aesthetic reasons in my practice is presented.

2) A tapered vertical lengthening jawline implant hand designed from a 3D printed jaw model was placed from a submental incision only.

3) Seventeen years later he came back for stabilization of the thin tail of the implant on the left jaw angle area.

4) While one case does not make a series, his results show that custom jawline implants are both safe and effective with no adverse long-term biologic effects in the bone.