Midline clefts of the chin are both a desired as well as a disliked facial feature. For some patients who have these chin clefts naturally, they would like the depth of the cleft softened or even completely removed.  Such a procedure, chin cleft reduction, is possible.

Contrary to popular perception, clefts of the chin are not primarily caused by an underlying cleft or defect in the chin (mandibular symphysis) bone. While some chin clefts do have a notch or indentation in the underlying bone, most do not. The cleft in the skin is caused by a separation or dehiscence of the paired mentalis muscle as it comes together over the chin. Technically, it is not a true separation but a failure of the muscle to come together during development as occurs in non-cleft patients.

The depth of the chin cleft is a reflection of the magnitude of the muscular split. In complete muscle separations, the chin cleft can be quite deep or indented with the edges of the skin completely turned in with little subcutaneous tissue between the cleft and the underlying bone. This understanding has relevance to how it may need to be corrected. Less deep chin clefts do not have such severe skin indents or inturning as the muscle is split less completely and more tissue exists between the cleft and the underlying bone. 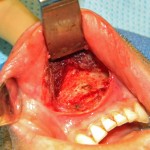 Correction (reduction) of chin clefts is done through an incision inside the mouth just above where the lower lip starts from the depth of the vestibule. The muscle is elevated off of the bone down to the underside of the chin bone. One can see the actual separation of the mentalis muscle. Muscle is freed up on both sides of the cleft and is sewn together across the muscle separatikon with dissolveable sutures. It is important to overcorrect or give it a little pucker as there will be some relaxation after surgery. This maneuver will certainly soften and reduce the depth of a chin cleft but may not completely get rid of it.

I have found that the best chin cleft corrections come from simultaneous chin bone manipulations as well. Whether it is a chin implant placement or a chin osteotomy, changing the shape of the underlying bone (advancements or vertical lengthening) has a positive effect on the outcome of chin cleft correction.

When the chin cleft quite deep, some consideration may need to be given to doing external skin incisions as well. Incising along the edges of the chin cleft, with or without a dermal-fat graft placed underneath, and bringing the external skin edges together gives the best correction. But at a price of an external scar…which may or may not be worth it. Some patients would argue that a fine line scar that is less indented is not as problematic as a very deep chin groove.

Conceptually, it is best to think about chin cleft surgery as a reduction of it, not a complete elimination. In my Indianapolis plastic surgery practice, this is a concept that I emphasize about this surgery. Some chin clefts will nearly disappear, the deepest ones are merely reduced. (unless one is willing to accept an external skin scar.