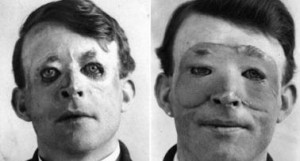 A recent article in the Daily Telegraph has an artist searching for family members of Walter Yeo, who is only currently known by a relatively famous picture of historical significance in plastic surgery. This well known picture shows a before and after picture of work done to burn injuries around his eyes. Mr. Yeo sustained horrendous burns which resulted in the virtual loss of both his upper and lower eyelids while aboard a warship in 1916. He was treated by Sir Harold Gillies in 1917 at Queen Mary’s Hospital with an innovative skin replacement technique known as a pedicled tubed flap. Mr. Yeo was thought to be the first patient who had ever received this newly-developed technique.

As opposed to the application of free skin grafts, in which new blood vessels are needed to grow in to survive, a tubed pedicle flap of skin brings with it its own blood supply. While Sir Harold Gilles is often credited with being the first to use this skin replacement concept, actually as many three other surgeons performed and reported on it around the exact same time. The Russian ophthalmologist and surgeon Vladimir Filatov in 1916 performed a tubed flap from the neck for lower eyelid reconstruction. In 1917, the German otolaryngologist Dr. Hugo Ganzer reported a pedicled tubed flap from the upper arm to close a palatal defect. Concurrently, Sir Harold Gilles performed Mr. Yeo’s pedicled flap around the exact same time. Interestingly, and perhaps not coincidentally, Drs. Aymard and Hett (who were working at the same hospital as Gilles) used a tubed flap from the chest as the second stage of repair of a nasal defect in 1917 also.

Besides the near concurrent timing of different surgeons applying for the first time the revolutionary pedicled tubed skin flap for facial reconstruction, what is the other common denominator…war. The pressure of wartime surgery and the uniqueness of the First World War with high explosives and heavy artillery created horrific facial injuries never seen before. And in the spirit of the trite expression ‘ Necessity is The Mother of Invention’, the fledging specialty of plastic surgery emerged.