« Case Study: Breast Lift with Implants for Postpartum Sagging
A Study of the MACS Facelift » 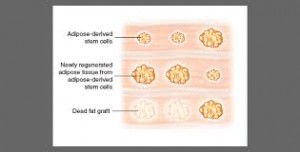 Fat grafting in plastic surgery has been around for over a century. It has waxed and waned in popularity for a variety of reasons but has recently undergone a major resurgence in clinical use. The primary goal of fat grafting when performed by plastic surgeons has been the restoration of soft tissue loss or elective aesthetic augmentation. Despite its widespread clinical use, the actual mechanism of how fat grafts survive remains incompletely understood. Two fat transplantation theories have been put forth known as the graft survival and the host replacement theory. Recent experimental studies have shown evidence that both mechanisms of graft survival may exist and may be patient and recipient site specific.

While these fat grafting survival theories may seem relatively new, they were initially proposed over fifty years ago. In the book Transplantation of Tissue Volume II (1959), Lyndon Peer in his chapter Part IV. Fat writes ‘The two conflicting theories regarding the fate of free fat grafts as this author’s hypothesis of cell survival as opposed to the hypothesis of host tissue replacement. The available evidence at this time seems to support the survival theory; certain durable adipose cells in free transplants survive and it is these cells which constitute the adipose tissue eventually remaining in the transplantation site’.

It is important to put into perspective that the only known method fat grafting back in Peer’s day was a dermal-fat or whole fat transplant. That is quite different today where the main method of fat grafting is by liposuction harvest and injection. It is more likely that particulated liposuctioned grafts require a greater contribution from host cell replacement, particularly from that induced by stem cells that are located throughout fat tissue.

While the techniques in fat grafting have come a long way in the past fifty years, our understanding of exactly how it works (or doesn’t work) has not come quite as far.