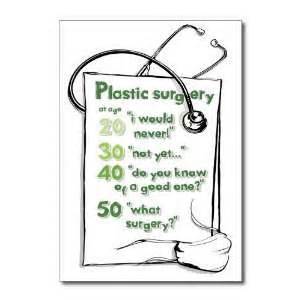 One’s perception of the ‘need’ for plastic surgery of the aging face is a matter of perspective as this word cartoon illustrates. I have heard many patients who are having some form of a facelift that their children are mortified that they are having the procedure. These younger children are not infrequently firmly against any form of physical self-change…and this is actually understandable. As I often say…when you don’t have the problem you don’t understand the need. No younger person can really see themselves as ever being older so it is easy to say what you feel now before you ever have had the actual problem. Age and the development of the problem will frequently change how one feels.

It is usually around the 40s that one begins to think that plastic surgery of some form may be inevitable or no longer seems like a bad idea. This is most relevant to the aging concerns around the eyes.  Botox injections has probably moved that age range younger as someone getting Botox in their 30s is not rare and this is an age when more invasive surgery is not needed anyway.

But the time one is in their 50s those so inclined may have already had some form of plastic surgery…even if they will not openly admit it.