The belly button, navel, or medically known as the umbilicus, is the scar from the umbilical cord which was divided at birth. This results in a depression in the skin which is attached to the underlying muscle fascia or covering sheath of the muscles. The divided cord scar typically forms a cavity or an “innie”. In some cases, an “outie” develops due to extra skin left behind from the umbilical cord. Many people feel that an “innie” is more appealing in appearance than an “outie.” 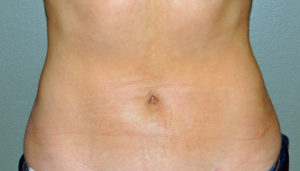 The shape of the belly button comes from the how the scar attaches to the underlying fascia, the looseness of surrounding abdominal skin, the fat under the skin, and how flat or protuberant one’s abdomen is. As a result, belly buttons vary greatly in their size and shape. While hidden for decades, the bellybutton has more recently become an attractive and sexy physical feature with the current fashion trends which flaunt an open midriff and an exposed belly button. Its recent fashion importance is illustrated by estimates that about one-third of college women now have pierced belly buttons. I see many middle-aged women in my practice who also have such piercings, trying to appear youthful and sexy.

Attractive belly buttons have been judged to be small and vertical in orientation, or have a T shape with a thin vertical hollow capped by an upper hood of skin. Belly buttons that are horizontal or irregular, often from the effects of pregnancy, weight gain or age, or if one has an outie are considered unattractive.

Most people are not aware that there are plastic surgical techniques to sculpt the belly button, known as an umbilicoplasty. Umbilicoplasty surgery can be done alone or as a necessary part of most tummy tuck surgeries. When done alone, it can be done under local anesthesia as an outpatient procedure. All incisions are placed inside the belly button. The skin inside the belly button is reshaped, and often small amounts are removed to help the reshaping. The skin is then sculpted by sutures into a newly shaped belly button. This result will be permanent once healed. One can return to work the same day and begin exercises in just a few days. All sutures inside the reshaped belly button are dissolveable. In some cases, usually where a protrusion exists, a small hernia is present which can be fixed at the same time. In these cases, I prefer to go to the operating room and perform the procedure under general anesthesia. Umbilical hernias are often covered by one’s medical insurance.

As part of a full tummy tuck where the skin and fat cutout goes above the exiting belly button, a new belly button must be formed after the tummy tuck is closed. A new outer hole is made (I prefer an inverted heart-shape pattern) and the stalk of the belly button is brought up and sewn to it. I like to keep the belly button stalk short so that when it is sewn to the outer skin it pulls down, creating a ‘drain in the center of the floor’ effect which helps in making a more youthful appearance.