While there are over a dozen injectable fillers available for human use in the U.S., many share similar chemical compositions. The vast majority are hyaluronic acid-based and, although they have different brand names and some differences in their duration of effects, they are vastly similar in their handling properties. 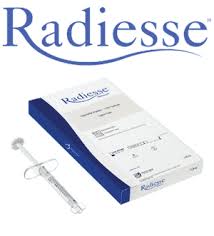 One of the very different injectable fillers is Radiesse whose composition is a combination of calcium hydroxlapatite particles and a sodium carboxymethyl cellulose gel carrier. It was FDA-approved in 2006 and has many similarities to other fillers such as its immediate effects, persistence of up to a year, a natural looking result and the stimulation of some temporary collagenesis as it resorbs.

But what really separates Radiesse from other fillers is its potential to really push or lift the tissues into which it is injected. Because it is a ‘stiffer’ material, it provides a greater push to the overlying tissues. More scientifically, it is it’s rheological properties of a high G prime or elastic modulus that enables it to be an effective lifting or supporting filler. G prime, the elastic modulus, is a measure of its firmness and resilience. A high G prime means that it is more resistant to external pressures and can hold its shape without being displaced or undergo shape distortion with facial movement. Thus the material stays where it is injected and has little tendency to spread.

As a result of these properties, the best use of Radiesse is for deep injections for facial voluminization as well as for the back of the hands. It is best thought of as a structural filler and is the closest a filler can get to resembling autologous fat injection grafting. Placement of Radiesse down to the bone in the preperiosteal plane allows the overlying muscles to be lifted  and refills the deeper fat compartments of the face. When placed over more prominent bony areas, like the cheeks, paranasal, chin and jaw angles, it can have more of a pseudoimplant effect.

Because of its tissue push capabilities, it creates a greater volumizing effect per ml of material than any other filler. Since it is available in up to 1.5cc syringes, it can provide a lot of correction in a cost effective manner.

Radiesse is the only FDA-cleared filler that is approved to be mixed with lidocaine by the physician at the time of injection. Besides the obvious benefit of the numbing effect, lidocaine adjust its rheological properties. This allows it to be injected with less force and decrease the risk of post-injection clumping.