Plastic Surgery’s Did You Know? The Injury Prone Earlobe 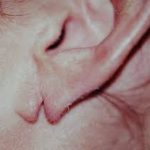 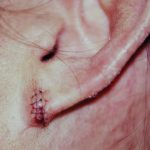 During this past Sunday’s NFL game between the Houston Texans and the Denver Broncos, Houston quarterback Matt Schaub suffered a vicious and illegal hit to the head by a blitzing Denver linebacker. Besides knocking his helmet off and flattening him on the ground, part of his earlobe was torn off. (inactuality the earlobe appears split) Witnessing this hit on TV, I can testify to the severity of the collision. This is a very uncommon football injury and is the result of the crushing impact on the helmet at intense speed on the poor little earlobe. Why did this ear injury happen this way…because of the difference in anatomy between the ear proper and the earlobe. The earlobe is the only part of the ear that does not have the structural support of internal cartilage. It is just skin and fat and is soft and structurally weak by comparison to the rest of the ear above it. This is why the earlobe can be stretched out by heavy ear ring wear and gets longer as one ages while the rest of the ear remains structurally unchanged.