Plastic Surgery’s Did You Know? The Roman Nose and Rhinoplasty 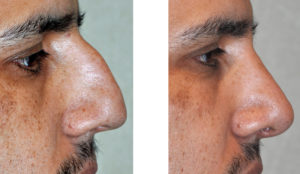 A Roman nose, also called a hook nose or aquiline nose, is one with a prominent bridge which gives it the appearance of being curved or slightly bent. The very word, aquiline, comes from the latin word aquilinus which means eagle-like in reference to the curved beak of an eagle. It is characterized by an outwards curve in the central area that protrudes far off from the face. The nose appears as a hook due to this predominant bridge. In Roman times such a nose shape was associated with a sign of leadership. This undoubtably serves as the genesis for the historic perception that people with this nose shape are often great leaders. Abraham Lincoln is often referenced in this regard since he had a Roman nose. But modern day rhinoplasty views the Roman nose as an unaesthetic one.  A straight line bridge or dorsum is viewed as a basic goal of rhinoplasty surgery. Taking down a bump or hump on the nose is a very common patient request. Patients wants a smooth and straight dorsum and a nose without a hook today. Taking down a nasal hook requires shaving down the bone and cartilage that it is composed of, creating an open roof deformity. This is closed down by breaking the nasal bones to collapse the sides and make a smooth and lower bridge of the nose.