« The Scar Differences Between A Mini- vs. Full Tummy Tuck
Quantification of Platelet-Rich Plasma Mixtures for Use in Plastic Surgery »

Spider veins of the legs are a common concern for many women. While their main concern is usually that of a cosmetic distraction, some women will have discomfort with them as well. They often appear in patches and may have deeper blue veins in the vicinity of the spider patch. This indicates, like the leafs on a tree, that spider veins are not isolated entities and are the result of valve incompetence of the larger venous system onto which they are conbected. This suggests that the treatment of spider veins in many cases will prevent further progression of the problem.

Despite the widespread availability and marketing of laser treatments, sclerotherapy is the gold standard in the treatment of spider veins. In the United States, the use of hypertonic saline and sodium tetradecyl sulphate (Sotradecol) are the two injectable agents available for use. While each has its proponents, there is no clear evidence that one is more effective than the other in experienced hands. Outside the United States, however, polidocanol (POL) is more commonly used.

Recently, POL has become approved for spider vein sclerotherapy in the United States and is now widely available. POL has had the reputation for years that it more effective than hypertonic saline or Sotradecol and has fewer potential skin and soft tissue complications should some of the solution get outside of the vessels. Is POL a better option for sclerotherapy and, if so, is it actually more safe?

In a 2010 issue of the journal Phlebology, a double-blind randomized comparative clinical trial of polidocanol, sodium tetradecyl sulphate and isotonic saline was published. In 316 patients, 160 spider veins and 156 larger reticular veins were treated with one of the tested injections. Digital images were taken prior to injection and at 12 and 26 weeks after the last injection. The study showed that more patients were satisfied with POL at 12 and 26 weeks (84%, 88%) compared to Sotradecol (64%, 63%) and isotonic saline. (14%, 11%) Injection site reactions (irritation, discoloration, necrosis) were significantly more frequent in patients treated with Sotradecol as compared with POL. 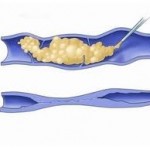 Requests for spider vein treatment are common in a plastic surgery practice. However, most plastic surgeons do not treat them for a variety of reasons including the lack of glamor in so doing and the tedious nature of providing the service. In my Indianapolis plastic surgery practice I do perform sclerotherapy and, under 2.5X loupe magnification, it is fairly easy to cannulate small vessels for the injections. Even though I have a laser that can treat spider veins, sclerotherapy in my hands is more effective, less painful and more economical for many spider vein patients. POL is a welcome new agent for sclerotherapy, particularly if it has a higher safety profile.