Extreme amounts of weight loss from bariaric surgery are well known to cause a lot of body changes with the development of sagging excess skin.  Of all the possible bariatric plastic surgery options amongst women the brachioplasty or arm lift procedure is usually in the top three body changes desired. (I have never had a request for an arm lift in a man) While it produces a visible scar, most patients are willing to accept that tradeoff get rid of their ‘batwings’ if they are big enough.

While patients are willing to accept the scars from arm lift surgery, modifications in the procedure have been done over the years to improve its appearance. One of the most important modifications has been where the scar is located. Options include the back of the arm (posterior), the inside of the arm (medial) and in between those two locations. (posteromedial) One of the considerations in choosing these scar locations is visibility. The posteromedial scar location is the most ‘hidden’ of the three although that is a relative concept when you have a scar running down the whole length of the upper arm. 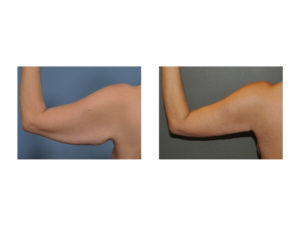 In the February 2018 issue of the journal Plastic and Reconstructive Surgery am article was published entitled ‘Postbariatric Brachiopasty with Posteromedial Scar: Physical Model, Technical Refinements and Clinical Outcomes’. In twenty-four (24) consecutive armlift patients, the authors performed armlifts consisting of posteromedial scar placement with fascial plications, liposuction and an axillary z-plasty. Skin specimens from the patients underwent mechanical stress testing. Before and after pictures of the arm lift scars were also assessed.

Postoperative complications consisted on only one wound dehiscence. (4%) The physical model testing showed that the stress intensity and distribution along the scar were reduced in the posteromedial location with smaller scar displacement in the loading simulations. Assessment of the scars were associated with high satisfaction rates in both patients and in dependent surgeon evaluations. 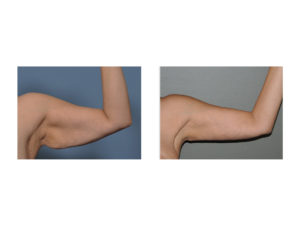 While the arm lift or brachioplasty procedures has been associated with a high rate of complications in the past, that has not been my experience. In fact, of all the postbariatric body contouring procedures it is the one associated with the highest satisfaction rates and the lowest occurrence of complications in my experience. I have learned by trial and error to place the scar line halfway between the inside and back of the arm where the skin is a bit thicker, heals better and offers the best concealment. (although hiding such a long scar is a relative concept) This paper’s biomechanical study using numeric simulations in torsion, partial flexion and total flexion showed that the logarithmic stress distribution is less with an arm scar in the posteromedial location and provides an explanation as to why this arm lift closure line provides a better scar appearance.