A custom jawline implant is the most effective method to reshape the lower third of the face. By expanding the inferolateral border of the mandible from angle to angle a linear jawline can be created with varying projections of its three corners…if one has the right facial structure to do so. (not overly thick soft tissue cover)

The design of a custom jawline implant is done from the patient’s 3D CT scan as the length from jaw angle to jaw angle is different for each patient. Rarely would one patient’s jawline have the right length for another. When looking at such designs the implant appears as one solid color with smooth surfaces and feathered edges just as the manufactured implant does. 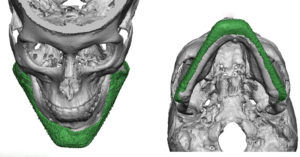 Some patients who have had custom jawline implants will eventually have other custom facial implants made or a need has arisen to check the position of the implant on the bone. When looking at these postoperative 3D CT scans, a jawline implant will look quite different. It will have a reasonably solid color but it will look irregular and a bit fuzzy. That does not mean the implant is actually that way as it is not. But in a computer reconstruction the density of solid silicone does not permit the same clarity to occur as that of metal for example. It is certainly a different look than the solid smooth appearing implant on the 3D design images. 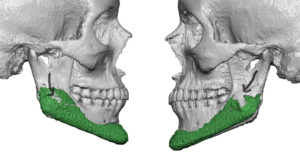 Another interesting finding seen in after surgery 3D CT scans of jawline implants is that of some bony overgrowth at the angle areas. This is actually very common and expected. Raising up the periosteum with the overlying masseter muscle is a stimulus for bone growth. The fact that it occurs over a silicone surface, which is not in and of itself an osteoconductive surface, speaks to the power of the periosteum in this part of the jaw. It has a corollary in silicone chin implants where a similar bony overgrowth along the implant’s edges is also seen in some patients. It is the tenting up of the periosteum by the implant the provides the biologic opportunity for new bone to develop along that interface.

3D C scans provide an unparalleled assessment of any implant’s positioning on the facial bones. In this particular patient is custom jawline shows idea positioning on the bone which matches perfectly to that of the design. More commonly, however, the jaw angle portions of the implant will often have some slight asymmetry as their positioning is very difficult to do from the lack of posterior implant edge visibility.