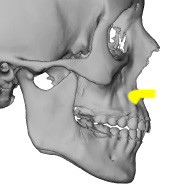 Augmentation of a deficient central midface can be done by a variety of methods including anterior maxillary movements, autologous vs allogeneic bone and cartilage grafts as well as implants. Most adult patients are not going to opt for major LeFort procedures and, as a result, augmenting the premaxillary-nasal base region remains the primary method for most patient with an unaesthetic nasolabial angle and protruding upper lip. 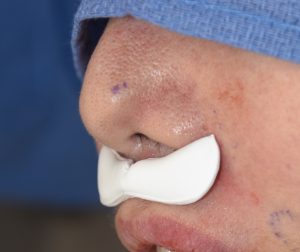 The use of premaxillary implants has a long history of which numerous materials have been used. Silicone, Medpor and ePTFE have all been used of which ePTFE premaxillary implants are my current preferred choice. But regardless of the material, an implant works by the concepts of a complete soft tissue release and the interpositional placement of an implant between the now released soft tissue and the underlying bone. In essence an implant displaces the soft tissue from its attachments and the desired external aesthetic change happens as a result.

In the Plastic and Reconstructive journal in the Aprill 2022 Global Open issue, a paper was published entitled ‘Novel Approach for Midface Depression’. In this paper the authors report using an innovative Point A-Koji method in a single Asian female patient with a depressed midface and mouth protrusion. With a nasolabial angle of 74 degrees the placement of a small metal plate at the anterior nasal spine area caused an A-point anterior migration.

Her five month cephalometric results showed a facial convexity increase of 4 degrees, a change in the nasolabial angle from 74 to 90 degrees (normal mean value in Asians is 88 degrees) and hard point A to soft tissue Sn had a horizontal distance increase of 4mms, all of which provided a visual improvement in her midface retruded appearance.

The point A-Koji method is a novel surgical method for an improvement in facial convexity that shifts the soft tissue Sn point forward while preventing the backward movement of the soft tissue. (premaxillary augmentation) It improves the facies by using a metal plate implant to support the periosteum around the hard tissue point A. Its effectiveness comes from the soft tissue release. It will take more than one patient with longer followup to determine where the nasolabial angle improvement is maintained, particularly in the face of how long it takes soft tissues to fully contract down around an implant or graft after release. But for the patient who wants an implant approach to improving the isolated nasolabial angle but wants to avoid any non-metallic material this is a reasonable approach to consider.