Silicone breast implants have been back in clinical use for the past decade. While there are various features of these implants, such as the gel composition and the characteristics of the enveloping shell, that get a lot of attention one overlooked feature is that of implant fill. This refers to how much the enveloping shell is filled which impacts the implant’s shape.

Historically silicone breast implants have been not fully filled. This creates the well known ‘ashtray’ effect where a crater or concavity exists on the top of the implant when it is laying on a flat surface. (or when the patient is in the horizontal supine position) It was never clear to me why the implants were never fully filled but my assumption is that a lower fill made them more deformable (to fit through a smaller incision) and made them feel softer. But by so doing more folds occur in the implant shell in the vertical sitting or standing position and less fullness is retained in the upper half of the implant. 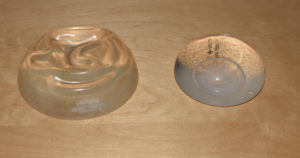 When laid side by side to ‘normal fill’ implants, the Mentor Xtra implant shows how the implant’s projection and shape is better maintained. (no ashtray effect) There is also less shell wrinkles when the implant is positioned on its side, which is how it would be in a patient when they are standing or sitting. Less wrinkling or implant folds also decreases the risk of developing fold flaws (tears in the implant shell), also known as implant ruptures.

It is finally time that more fully filled silicone breast implants became available. This has been a ‘flaw’ in breast implant designs/offering for a long time. The merits of having underfilled implants that have an ashtray effect has always been unclear to me.