Profileplasty by Rhinoplasty and Sliding Genioplasty

While one does not see their face in a profile view naturally (only in pictures), the world sees your face in three-quarter view or in profile. Thus the perception of one’s own facial profile is important and it is stressed in many plastic surgery procedures. The two most important hard structures that make up the profile is the nose and the chin. As such the combination of a rhinoplasty and genioplasty is often done together. When done simultaneously, this combination has even been called a profileplasty.

These two profile structures influence each other even if only one is surgically changed. It is well acknowledged that reducing a large nose makes the chin look bigger and chin augmentation can make the nose look smaller. Certainly it can be a very powerful profile changer when a larger nose and a smaller chin are simultaneously corrected.

While a reduction rhinoplasty can be done by various methods based on the actual deformity, these represent relatively minor technical differences in the manipulation of the bone and cartilages. In contrast, a genioplasty can be done by fundamentally different techniques…an implant or an osteotomy. (sliding genioplasty) There are advantages and disadvantages to either type of genioplasty but most patients undergo the ‘simpler’ implant augmentation. Only a minority of chin augmentations are done by a sliding genioplasty although this is often the common chin augmentation technique for oral and maxillofacial surgeons.

Long-term outcomes of combined rhinoplasty and genioplasty patients are rarely reported probably because most plastic surgeons correctly assume that patients are very happy and there is little to gain by looking at the long-term results. But no studies to my knowledge have ever been reported looking at combined rhinoplasty and sliding genioplasty augmentation. 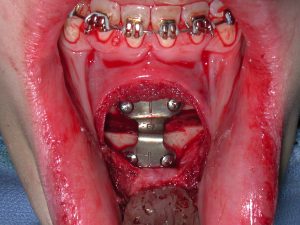 In the July 2013 issue of the Archives of Facial Plastic Surgery, a study was published entitled ‘Combined Rhinoplasty and Genioplasty: Long-term Follow-up’. In this paper, a total of 90 cases of combined open rhinoplasty and augmentation/reduction genioplasty over a three year period were reviewed to assess the stability of the aesthetic results. Specifically the chin was studied by anthropometric measurements. Soft tissue pogonion projection to the true vertical line and mandibular height (incisor to menton) were measured. The average horizontal augmentation genioplasty had 7mms advancement and the average vertical lengthening genioplasty had 5mms increased height. The measurements shows a 100% stability after three years. In reduction genioplasty, half of the patients had 100% stability after three years. The results of this study showed that there is minimal change (less than 1mm) in the chin position as part of a profileplasty.

While rhinoplasty and genioplasty is common, doing the genioplasty portion by a sliding osteotomy rather than an implant is very uncommon. The only advantage that a bony genioplasty has over an implant in most typical aesthetic patients is when a vertical chin change is needed. Given the average amount of horizontal advancement in this study that movement alone is well within the range of what an implant can do. The stability of the bony movements of a sliding genioplasty has been extensively studied before without being done at the same time as a rhinoplasty. This study corroborates what many studies have shown before, bony chin changes are fairly stable and any relapse or bone resorption is not clinically observable or significant.