Darkening of the eyelids, known as periorbital hyperpigmentation, is when excess pigment develops on the eyelids. While it can occur on either the upper and lower eyelids, and often involves both, it is most common and aesthetically troublesome on  the lower eyelids. Its causes is not exactly known and is multifactorial and has been ascribed to such events as sleep deprivation, smoking, alcoholism and excess sun exposure. Treatments for periorbital hyperpgmentation do not currently produce consistent nor uniform results. 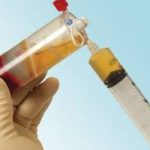 In the March 2014 issue of the American Journal of Dermatology and Venerology, an article entitled ‘Treatment of Periorbital Hyperpigmentation Using Platelet-Rich Plasma Injections’ was published. Over a one year period, fifty (50) patients (almost all females) with periorbital hyperpigmentation were treated with PRP (platelet rich plasma) injection therapy. The periorbital area was injected with PRP for a total of three treatments spaced one month apart. The entire face was also injected at the same time. Using digital photos the results of these PRP treatments were assessed after six months from the last treatment. Very visible treatment was obtained in eight patients (16%), moderate improvement in twenty three patients( 46%) and minimal improvement in nineteen patients. (38%)

Periorbital hyperpigmentation, especially of the lower eyelids, is an aesthetic problem that defies one single effective solution. It is seen most commonly in patients who have significant skin pigmentation. Many treatments have been advocated for it from topical skin bleaching, laser resurfacing and light therapies, injectable fillers, fat injections, orbital rim augmentation and lower blepharoplasty skin tightening. While effective in some cases, there is no treatment that is universally effective for everyone. Getting excess pigment out of the skin is difficult without risking injury to the skin that contains it.

The biologic basis for the development of excess pigment on the eyelids has been suggested to be due to chronic edema and lymphatic congestion which causes a hyperpigmentation response. Improving the vascularity of the eyelids tissues is thought to potentially improve lymphatic outflow and allow for pigmentation reduction. This would be the potential mechanism for why PRP would produce an improvement in the eyelid hyperpigmentation. This plasma suspension obtained from processing the patient’s whole blood has a high concentration of platelets which contain high levels of growth factors. These are well known to produce healing responses marked by increased vascularization. and improved tissue perfusion levels. This may the mechanism for the clinical improvements seen in this study.