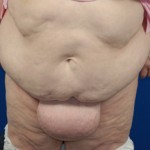 One area of sagging skin in the abdominal region that is not frequently addressed is in the pubic or mons area. Although a tummy tuck or body lift removes a lot of loose abdominal skin, it can still leave excess pubic skin behind resulting in a mons sag. This is often disturbing for patients as they did not anticipate this residual problem. In some, this sagging pubic skin is significant enough that it may interfere with intimacy or the urinary stream in some female patients.  Mainly, however, it is just a cosmetic problem with a mismatched sagging pubic mound sitting below the horizontal abdominal scar from their abdominal contouring surgery.

A pubic lift (monsplasty) can be incorporated as part of a body lift or tummy tuck. I use a more inferior placement of the lower central abdominal incision when performing a body lift or tummy tuck so that the sagging pubic area (if present) gets lifted more than the surrounding areas.  This is a simple modification of the frontal abdominal excision that may avoid the need or desire for a secondary pubic procedure. It is like dropping a shallow ‘U-shaped’ extension of the planned lower abdominal incision. One of the cosmetic ‘problems’ that this modification will create, however,  is the the buffer zone between the final incision/scar and the pubic hair line is lost. The pubic hairline will be brought right up to the scar line. This can be easily remedied later by laser hair removal.

If a sagging mons area exists after a tummy tuck or an abdominal panniculectomy, it can be lifted by a fairly minor operation later. An inverted U-shaped cutout pattern is done starting at the existing lower abdominal incision. The extra loose skin is removed so that the sagging part of the pubic area is brought up to the scar. The same problem with connecting the upper part of the pubic hairline with the horizontal abdominal after will result also.