Rejuvenation of the Aging Lower Eyelid and Cheek

There are many signs of facial aging but most people are usually concerned with what happens around the eyes first. The classic presentation of periorbital aging is a progression of tissue changes including excess lower eyelid skin, protruding orbital fat (bags), lower eyelid instability and the falling of the adjacent cheek tissues. (malar descent) While the upper and lower eyelid ages similarly in any person, the scope of the lower eyelid is actually bigger if you include the surrounding cheek regions. Thus the lid-cheek region is a frequent target for facial rejuvenation efforts.

Traditionally, these aging changes were managed by a standard lower blepharoplasty operation which involved an elongated lower eyelid incision and removal of skin and fat. While this basic operation still works well for many lower eyelid concerns, it is known to have potential lid malpositioning problems with risks of ectropion (lid sagging) and separation of the globe-lid intimacy. The precarious suspension support of the lower eyelid is prone to being disrupted by incisional placement, delamination of the lower eyelid tisues with lack of orbicularis muscle integrity near the lid margin, unrecognized weakness of the lateral canthal tendon and over-resection of lower eyelid skin.

One lower eyelid rejuvenation trend that has become commonly used over the past decade, partially as a response to the risk of ectropion, is the transconjunctival approach. Avoiding skin resection and an external lid incision, herniated orbital fat can be removed or repositioned through button hole sized incisions on the inside of the lower eyelid. While protruding orbital fat was once uniformly removed, it is now frequently being preserved and used as a filler for tear troughs, nasojugal grooves and creating rim augmentation to smooth out the lid-cheek junction. Because the blood supply to the overlying lower eyelid skin is preserved, skin resurfacing for wrinkles can be done with lasers or chemical peels. 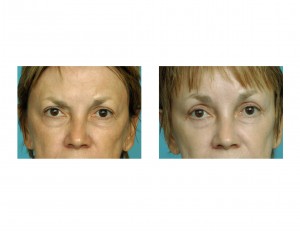 One evolution of lower eyelid rejuvenation, which is the opposite of a transconjunctival blepharoplasty, is the extension into simultaneous cheek rejuvenation as well. These so-called cheek or midface lifts are a collection of procedures whose technical differences can be as diverse as the surgeon who performs them. Lifting up sagging cheek tissues through a full lower blepharoplasty incision and securing to some location along the zygomaticorbital bone, or even higher to the temporal and forehead regions, allows them to sit back up or higher on the cheek bone. But because it is a more invasive and extensive procedure with much wider tissue dissection than a lower blepharoplasty, it ironically has an even higher risk of ectropion and lower lid scarring problems if not executed to technical perfection.

While it can cause it, these cheek lifts can also be used to treat lower eyelid retraction problems as well. Lifting and supporting the surrounding cheek tissues can relieve the tension on the repositioned lower eyelid at the lateral orbital wall. Releasing the lower eyelid scar, retightening or remaking the lateral canthus and some cheek tissue release and resuspension can be very effective for getting the outer aspect of a retracted lower lid back up against the globe.