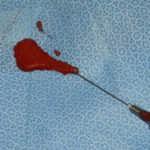 Volumetric restoration or augmentation of the upper eyelid requires the placement of fat. While fat grafting has been widely used all over the face, there is no consensus for how it should be done in the upper eyelid. Techniques vary widely from an open or closed approach and which plane in which to place the fat grafts.

In the November 2017 issue of the journal of Plastic and Reconstructive Surgery an article was published entitled ‘Fat Grafting in Hollow Upper Eyelids and Volumetic Upper Blepharoplasty’. In this paper the authors review their experience in thirty-two (32) women who had fat grafting to the upper eyelids over a four year period. The majority of these involved skin resection (26) with the remaining minority being augmentative only. (6) The term ‘volumetric upper blepharoplasty’ refers to a dual plane fat graft placement combined with orbicularis muscle imbrication. The average amount of injected fat grafting was 0.4cc in the deep plane (concave depression below the supraorbital rim) and 2.8cc in the superficial plane. (1mm over the eyebrow to a line 10mm above the ciliary margin) If skin for an upper blepharoplasty is to be removed it is secondarily done with the consideration of the tension that will be placed on the closure by the fat grafts. In each patient treated the inverted ratio was adequately corrected in the front view. In the side view the concave shape was converted into a convex one, regardless of the technique used. No infections were seen nor was any revision procedure done. Some far graft loss was seen in six patients but it did to affect their results.

Volumetric upper blepharoplasty is primarily a fat grafting technique in which any skin resection is complementary. The goals of fat grafting and the muscle plication is to increase the muscle volume. The skin resection serves to smooth out the upper eyelid and lower the supratarsal crease. This technique is really a paradigm shift in how upper blepharoplasty can be performed although its application is to the subset of patients who have upper eye hollowing.