Repair of the Large Gauged Earlobe

Gauging the earlobe through sequential expansion devices seems relatively new, but it is a custom in some cultures that dates back well into antiquity. It is the earliest form of tissue expansion and proves that even the smallest body structure can be modified by simple pressure. While it is a fashion statement for some today, usually in younger patients, it often is not a body alteration that is maintained over one’s lifetime. Thus it is not uncommon today to see a ‘looped‘ earlobe in which the owner would like to see a more normal earlobe restored.

For small gauged ears, removal of the gauge will allow much of the hole to shrink down. Given a few months the hole in the ear will usually end up as just a small slit in the middle of the earlobe. This is a well known phenomenon that occurs in tissue expansion when the device is removed. It can be remarkable how large of an earlobe hole can close down of given enough time. It will still require surgery to put the earlobe edges back together but the smaller the hole the easier and more natural it will look. But in very large gauged ears or if one is in need of a more rapid closure, a different earlobe reconstructive approach is needed.

In the October 2014 issue of the journal Plastic and Reconstructive Surgery Global Open issue, an article appeared entitled ‘Repair of Massive Earlobe Piercing and Plus (Gauging)’ In this short case report, the authors report a single patient in which one earlobe had a 3 cm hole secondary to gauging over a seven year period. The gauge was removed sic weeks prior to surgical repair. The earlobe was repaired and closed using a pedicled skin flap from the inferior rim. The anterior aspect of the expanded earlobe skin was removed the lower skin flap rotated up into the defect to recreate a smaller and shorter earlobe. 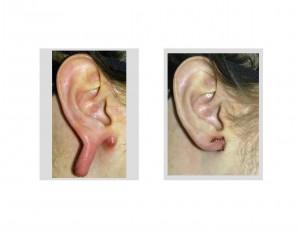 While repairing a gauged/enlarged earlobe seems simple because there is an excess of skin, it is actually a bit trickier that it seems. Creating an earlobe that is not excessively long and actually looks like a natural earlobe can be challenging in very large gauged ears. This is because the anterior rim of expanded skin is very thin and often not useable. While in smaller gauged ears excising the low hanging loop of stretched earlobe skin and bringing together the front and back edges of the earlobe will work. (although it will result in an attached earlobe rather than one that has a separation between the earlobe and the side of the face) The excessively or massive expanded ear leaves the front edge of the earlobe unusable. This then requires using the expanded posterior earlobe as a tubed pedicled flap for the earlobe reconstruction as demonstrated in this paper.