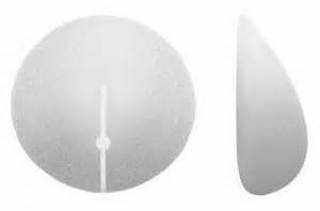 Silicone breast implants have been available in two different shapes for well over a decade. Besides size (implant volume) and projection (height vs width), patients can also choose between shapes. (round vs anatomic) The name and concept of an anatomic breast implant is a very appealing one for patients, particularly those who seek a natural augmentation result. Such a result is defined essentially by having the lower pole of the breast fuller than that of the upper pole. The anatomic implant has that shape and thus would seem to be a logical choice for those women who want to avoid rounder looking breasts postop.

Since their clinical introduction there has been controversy as to whether such a difference in impact shape long-term in the upright position really does create this  natural breast shape. When the added cost of the anatomic silicone breast implant is considered as well as the potential for breast shape distortion should the implant rotate, some surgeons will not implant them. This avoidance is compounded when their is little compelling clinical evidence that an implant shape affects the final breast appearance.

In the March 2018 issue of the journal Plastic and Reconstructive Surgery, an article was published on this topic entitled ‘Round versus Anatomical Implants in Primary Cosmetic Breast Augmentation: A Meta-Analysis and Systematic Review’. In this paper the authors searched multiple online databases for clinical studies that evaluated the postoperative effects of round vs anatomical implants in primary breast augmentation. They identified  one randomized controlled trial and four observational compare studies for review.  (total of 297 patients , 155 with round implants and 14 with anatomic implants) Outcomes of overall appearance, naturalness, breast projection, upper pole contour and identification of implant shape were systematically reviewed.

The author’s results and conclusions were that both round and anatomic implant shapes produced similar aesthetic outcomes. No aesthetic superiority was seen with  anatomic implants compared to round ones. Plastic surgeons were unable to detect the two implants from looking at breast augmentation results.

While the ultimate role for anatomic implants in breast augmentation remains to be determined, it does not appear that the seemingly apparent benefits are clinically seen in most cases. Given the current issues with textured implant surfaces that have emerged, which every anatomic implant has to have and round implants do not, non-textured round silicone breast implants are n effective choice for most women.